Following Ricky Metaxas’ talk at the 50th Anniversary of the International Microwave Power Institute [IMPI] in Orlando in June 2016 it was announced that the Board of Governors of IMPI had bestowed on him an Honorary Fellowship. 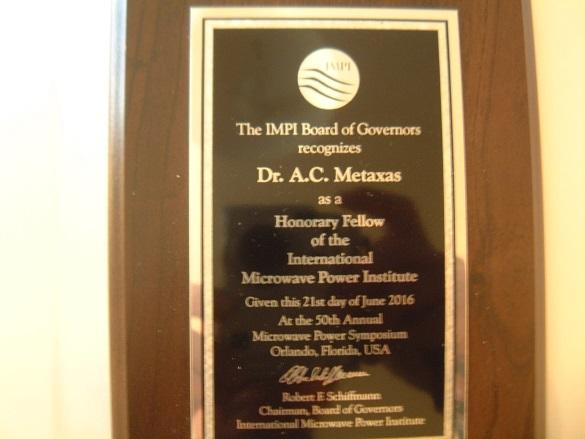 Ricky, Director of AC Metaxas and Associates, was very grateful to accept such an honour and he thanked IMPI’s President and the Board of Governors for such an accolade.

Dr Metaxas presented the third quadrennial Ricky Metaxas Pioneer Award at the 3GCMEA (3rd Global Congress of Microwave Energy Applications) venue in Cartagena, Spain in July 2016. This is a named award bestowed on Dr Metaxas which was first set up by the Japanese who organized the first such Congress (1GCMEA) in Japan in 2008.

At the 3GCMEA it was awarded to Mr John Gerling, of John Gerling Inc., a company which is now part of MUEGGE in Germany which is a leading international manufacturer and supplier of systems for advanced industrial microwave heating and plasma applications.

John Gerling upon receiving this award commented, “I want to express my deepest gratitude for having received such a prestigious award and I hope to live up to such an honour in the years to come”.

The above photo shows John Gerling flanked by Professor Juan Monzo-Cabrera, the Chairman of 3GCMEA and Ricky Metaxas. On the right is Professa Cristina Leonelli, President of AMPERE (Association of Microwave Power for Education and Research).

Consultants on the use of radio frequency and microwave energy into the industrial sector ...