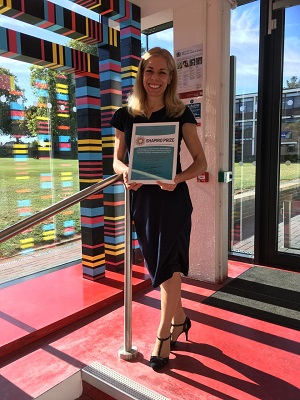 Dr Eldré Beukes of Anglia Ruskin University (ARU) has been awarded a prestigious research prize for the third year in succession.

The Marie & Jack Shapiro Prize is awarded by the British Tinnitus Association (BTA) to the piece of published research, by a UK-based author, “most likely to result in improved treatment or public awareness of tinnitus”.

Dr Beukes’ latest research “Effectiveness of Guided Internet-Based Cognitive Behavioral Therapy vs Face-to-Face Clinical Care for Treatment of Tinnitus: A Randomized Clinical Trial” was chosen from a shortlist of 30 eligible papers by the BTA’s Professional Advisers’ Committee. She was presented with the award at the BTA’s 26th Annual Conference in London.

Tinnitus is defined as the experience of sounds with no external source, most commonly ringing or buzzing, but sometimes experienced as whooshing, clicking or even music. Around one in eight adults experience tinnitus, and for some it can lead to stress, anxiety and sometimes depression.

Dr Beukes, a Research Fellow in Vision & Hearing Sciences at ARU, said: “The findings from our research indicate the clear potential of this intervention as an additional, effective, accessible tinnitus intervention for those struggling with the devastating effects of tinnitus.

“It has been such a privilege being involved in this research and seeing the positive effects in helping those with tinnitus. We are so pleased and delighted to win this prize! It is a huge honour receiving it three years in a row.”

David Stockdale, Chief Executive of the British Tinnitus Association, said: “We are delighted to award Dr Beukes and her team the Marie & Jack Shapiro Prize for an unprecedented third time in a row. It indicates the real potential for iCBT as a tinnitus treatment which has obvious clinical benefits and the ability to improve the quality of life for people with tinnitus.

“The competition was tough this year as there were a record number of research papers in the running. The increased number of eligible papers year-on-year, and progress being made in tinnitus research is very encouraging to see, and offers hope as we drive progress towards a cure.”