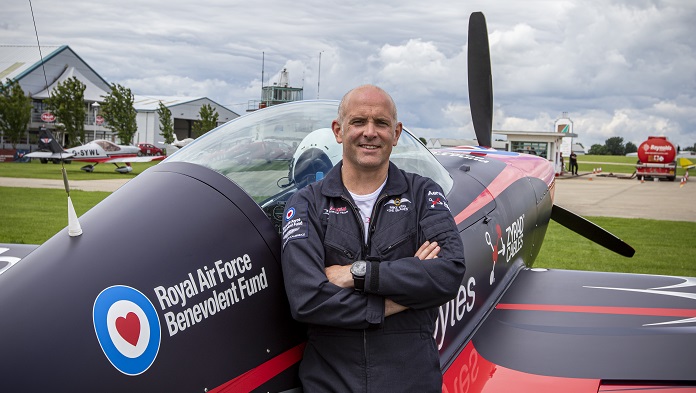 The Blades, an aerobatic display team of former Red Arrows pilots, will be wowing crowds at Duxford Summer Air Show this weekend (24/25 July). The team returns after 2020’s Summer Air Show and Battle of Britain Air Show were both cancelled due to Covid-19 restrictions.

Blade 3 Mike Ling is the Red Arrows' longest serving pilot, clocking up more than flying 1,700 hours over his 10 years with the Reds, but his career has not been entirely turbulence free. During a Red Arrows training session in Crete in 2010, Mike was involved in a mid-air collision with another Red Arrow jet. He spent weeks in hospital, with injuries including badly damaged legs, arms, substantial burns, a dislocated shoulder, lacerations on his face and damaged lungs.

However, with the support of the RAF Benevolent Fund, Mike was able to get back on his feet and back in the air. The Fund provided a powered wheelchair for the remainder of his recovery, which helped Mike regain some of the independence he lost after his accident and allowed him to take care of himself again. Now Mike is giving back to the Fund by helping raise awareness of the charity’s important work and the practical, financial and emotional support services it offers.

Mike said: "As a former RAF station, Duxford played a pivotal role in some of the Second World War’s most notable events. It’s always been a pleasure to display here and keep some of that history alive. I'm lucky enough to fly a Spitfire at the moment, as well as display with the Blades, so to celebrate the aviation strides we’ve made over the years and support our charity partner, the RAF Benevolent Fund, is an enormous privilege.

“The Fund is proud to be there for the whole RAF Family, be they veterans, serving personnel or members of the RAF Air Cadets. They were there for me when I needed support so I'm passionate about raising awareness of how the Fund can help others - something that's particularly important this year given the additional pressures Covid-19 has placed on the RAF Family. So as well looking forward to thrilling the crowds this weekend, if through our partnership and the Blades display, I can help reach just one more person, then that’s a great success too.”

The RAF Benevolent Fund is supported by the Blades Aerobatic Team who help spread the word about the work the charity does providing financial, emotional, and practical assistance to serving and retired RAF personnel and their families.

The Blades will be in good company at Duxford as they will be joined by two of the RAF Benevolent Fund’s other partners: the RAF Falcons Parachute Display Team and the RAF Typhoon Display Team. As this year marks the RAF Falcons’ 60th anniversary, the team will be showcasing a special anniversary display, while the RAF Typhoon will also be dazzling crowds with its iconic display.