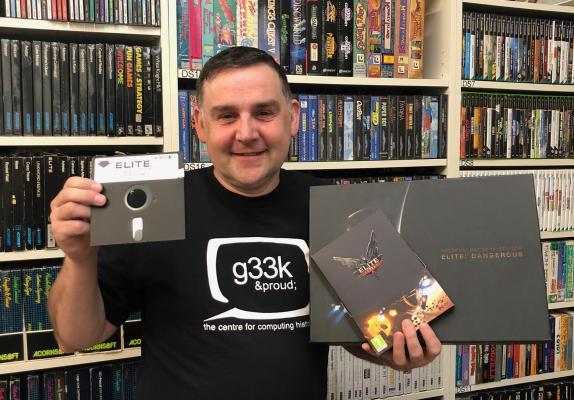 The Centre for Computing History, also based in Cambridge, contains the largest documented collection of video games in the UK and is a fully accredited museum that tells the story of the Information Age through exploring the historical, social and cultural impact of developments in personal computing.

The museum, which is also an educational charity, not only holds a collection of video games, but also a vast collection of computers, game consoles, software, magazines, books, peripherals and all of the supporting documentation and ephemera that supports them.

Frontier was founded in January 1994 by David Braben who was already well known in the industry for ​co-creating the seminal game Elite that launched on the Acorn BBC Micro. Today Frontier employs 500+ people, and has created hugely successful games such as Elite Dangerous, Planet Coaster, Jurassic World Evolution and Planet Zoo.

David Braben, now CEO of Frontier, said, “As someone who has been in the video game industry since 1981, I believe the work that the museum is doing in ensuring that those early computers and video games are preserved for future generations to enjoy and learn from is vital. A whole generation of programmers learned on the open and easy-to-program machines in those early years and have gone on to found major companies, and this was the inspiration behind Raspberry Pi too, to give that opportunity to new generations. I would urge other game and software developers to support the Centre for Computing History too and ensure that our legacy is carefully preserved and well-documented.”

With the museum currently closed to the public due to the coronavirus lockdown, the sponsorship could not come at a better time. The much-needed funding helps the museum dedicate otherwise furloughed staff to documenting, cataloguing and preserving its collection.

The museum is a repository for far more than just the video games themselves. It curates a collection of video game development equipment, concept artwork, developer notes, marketing materials, source code, video play-throughs, and interviews with the developers themselves.

Jason Fitzpatrick, Computer Historian & Curator at the centre said, “​Video games are a snapshot of the popular culture of their time. They often mirror what is happening culturally at the time. The Space Race, Cold War and even awareness of mental health issues, are all topics that have contributed to trends in gaming. It is vital that video games are treated in the same ways as books or films for example when it comes to preservation. We are deeply grateful to Frontier for supporting our preservation work at a time when it helps us the most.”

Image: Jason Fitzpatrick with the Limted Edition backers edition of Elite Dangerous and an original 5.25" Floppy disk from the early 80s.

The museum collection is available to browse and search online: http://www.computinghistory.org.uk/search

For information about Frontier see: https://www.frontier.co.uk/about-us

Posted by The Centre for Computing History

The Centre for Computing History was established to create a permanent public exhibition that tells the story of the Information Age. ...