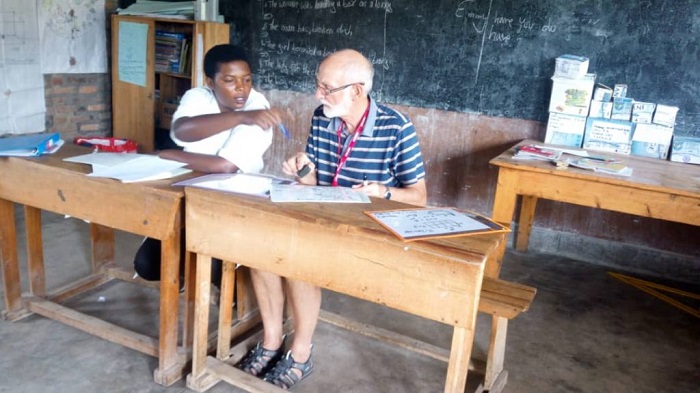 Deaf children in East Africa are enjoying the gift of education thanks to college tutors who volunteer with a charity that improves the lives of young people.

The support includes fitting hearing aids for youngsters, which has dramatically improved life for one young boy, who was beaten within his community for not moving out of the way when cyclists rang their bells as they passed him.

Now, he can hear the bike bells he is able to move out of the way, so he and his parents feel safer when he is out and about.

DeafReach is a small charity working with two residential schools in Africa, where deaf youngsters are taught a range of skills including sign language, IT, construction and sewing skills to help them find work.

In the background are a range of volunteers including Robert Golding (pictured with a pupil), a study support specialist lecturer with Cambridge Regional College, who flies out to the region to teach mathematics to the African tutors.

Joining him is his partner Isabel Blakeley who founded the charity with a small group of trustees, after enjoying Voluntary Service Overseas work in Rwanda.

Robert said: “Being involved in this charity means we’re giving a long-term gift of education to young people.

“There are two schools, one of which has recently been completely renovated, thanks to charity fund raising. Some of the renovation work included their own much-needed water provision.

“We go out every two years for two weeks in October and provide continuous professional development for the teaching staff there. Many of the volunteers who go out are teachers of the deaf and then there are also tutors like me who teach specific subjects. In my case it is maths. It is humbling to know we have the opportunity to help,” he said.

Volunteers return home with many stories of success, including a young boy who was beaten because he did not move out of the way of bike riders ringing their bells, as he could not hear them.

Now, thanks to the charity, he wears a hearing aid so he can move out of the way of cyclists, which means he and his parents feel more confident when he is out.

Next step for DeafReach is setting up provision for deafblind children and adults in Rwanda and finding the money needed for the project.

Robert is part of this by arranging a fund-raising day at Cambridge Regional College where he will have a stall on December 10 selling a wide range of goodies, including bags made by students at the African schools.

The work has a huge impact in the lives of people which is sustainable for the future.

Robert said: ““We are involved because we believe we can make a difference.”

Cambridge Regional College is one of the country's top 20 apprenticeship providers and a leading business and professional training provider, as well as one of the largest and most successful further education colleges in the UK. It has nearly 3,500 apprentices currently in training and works with 1,500 local, regional and national employers.