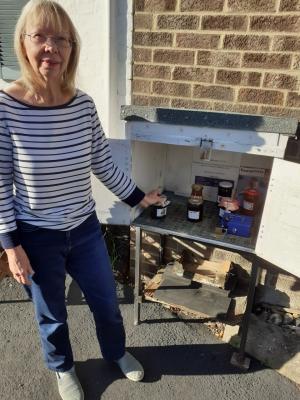 A jam stall in the Cambridgeshire village of Hildersham, set up some three decades ago, has raised money for East Anglia’s Children’s Hospices (EACH), enjoying one of its best years yet due to increased footfall caused by lockdown.

The stall was originally set up by Di Arkwright and continues to this day in her memory. It has travelled across the village, popping up in various locations as different villagers have taken ownership. In 2011 the stall moved next to the Pear Tree pub before the couple who ran it relocated to Dorset, in 2013, and handed the reins to Jill Heale.

Jill (pictured) has managed the stall for the past seven years, during which time it has raised over £5,574, which Jill is hopeful will be increased to £6,000 by Christmas this year.

She said: “I’ve found I really enjoy it and have even ventured into making some preserves myself.

“We have some talented cooks in the village who supply the stall with delicious offerings, mostly made with fruit from local gardens and allotments. Some unusual lines this summer were jostaberry jam, hot chilli jam and crab apple jelly. However, it’s not all about jam. We also have homemade marmalades and chutneys, and produce such as eggs, runner beans, marrows and fresh bay leaves are available from time to time.

“Lockdown saw a big increase in walkers and cyclists. Consequently, many more people discovered the jam stall. It seems to have developed its own following. Thank you cards and notes have been left, and it's a designated destination for some walkers. By September our fundraising had already surpassed the total for the whole of 2019. We are very grateful to all our supporters and proud to be making a small contribution to a very worthy local charity.”

Phillipa Graham, EACH Cambridgeshire Fundraising Assistant, said: “It’s lovely to hear our supporters’ stories. Fundraisers like these really show how communities working together can make a big difference to charities like EACH. We’re so grateful to supporters like Jill and the rest of the community around Hildersham, and can’t thank them enough for their decades long support.”

EACH, like many charities, has faced an extremely challenging year, with a hugely significant drop in the voluntary income it is so reliant upon. Fundraisers like Hildersham’s jam stall help the charity to support around 450 families of children and young people with life-threatening conditions, including around 100 bereaved families, at any one time. To support EACH in continuing its vital work with some of the region’s most vulnerable families, donate here.

Alternatively, you could look at setting up your own fundraiser for EACH. For ideas go to: each.org.uk/get-involved/fundraising-ideas