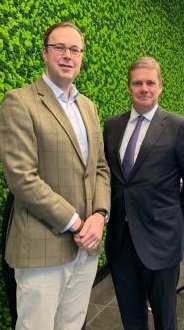 Charlie Hamilton has joined the Deloitte Transport Advisory team. Charlie’s role will focus on advising transport clients in the UK and Middle East.

Prior to joining Deloitte, Charlie was the managing director of multiple bus and coach companies in the UK, including Cambridge-based Whippet Coaches, a 100-year-old company that doubled in size under Charlie’s stewardship.

During his career Charlie has co-founded a technology transport company and was on the team who secured the Innovate UK funding to run demand responsive autonomous shuttle services on the southern end of the Cambridgeshire Guided Busway.

Paul Schofield, South East East practice senior partner at Deloitte in Cambridge (pictured right with Charlie Hamilton), said: “As well as recruiting 25 graduates and school leavers in our Cambridge office earlier in the Autumn, Deloitte has also welcomed several experienced hires too.  Charlie has a great industry pedigree - in both operations leadership and advisory roles - making him well placed to provide leadership and support as the public and private sectors look to find optimal transportation solutions, particularly in challenging locations.”

Charlie is a Fellow of the Chartered Institute of Logistics and Transport and a Trustee of a national transport charity, Campaign for Better Transport.