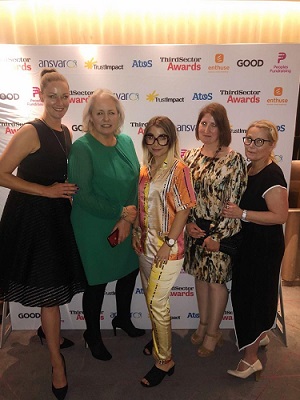 East Anglia’s Children’s Hospices (EACH) is celebrating after winning a coveted charity award. The charity, which supports families and cares for children and young people with life-threatening conditions across Cambridgeshire, Essex, Norfolk and Suffolk, has scooped a prestigious Third Sector Enterprise Award.

The award recognises the meteoric rise of its retail performance.

The ceremony took place in London on Friday (17th September) and the proud EACH team was represented by Sarah Throssell, EACH Head of Central Operations, and representatives from the retail team.

Just being nominated represented a huge achievement and is testament to the success of the charity’s retail arm, especially in a challenging climate during the pandemic.

EACH Director of Retail Ian Nicolson said: “We were absolutely thrilled to win this very prestigious award.

“All the profits raised in our shops go towards the vital care services EACH runs 24 hours a day, seven days a week. We need to raise £5.4 million in shop income this year to help keep our three hospices running, providing vital care and support for families, and this simply wouldn’t be possible without the incredible work of our staff and volunteers.

“We recognised that some people feel high streets are becoming saturated with charity shops, so we’ve continued to adapt our business to offer something different as we aim to be the most loved charity shop in our community.

“We’ve introduced a range of new outlets, including boutique and furniture shops, and always try to offer something special, like free books for kids during school holidays to engage our customers.”

The award category was for a social enterprise or charity that has ‘significantly improved its income from commercial activities in recent years’.

EACH has developed a thriving retail sector which is an essential funding stream to keep care services running.

From 14 shops in 2014, the charity now has 44 across East Anglia and in 2019, EACH was recorded as the second-fastest growing retailer in the annual Charity Shops Survey.

As well as increasing income and physical shops, the charity has focused on growing its online presence.

EACH has a thriving eBay store which has seen a threefold increase in income since its launch in 2016.

Following the achievement of a new record turnover of £243,889 in 2019/20, the shop took income of £311,131 in 2020/21, despite being closed for three months due to lockdown. The store sells items across the world and has even sold clothes donated by EACH Ambassador Ed Sheeran.

More recently, the charity launched a shop on Amazon Marketplace and 2021 saw the launch of Style with EACH – a new vintage shop on ASOS Marketplace.