Volunteers and families who have received care and support from East Anglia’s Children’s Hospices (EACH) joined The Duchess of Cambridge for a special carol service at Westminster Abbey. 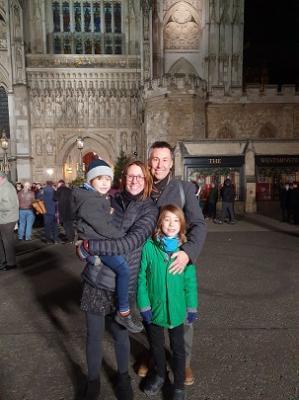 The event, entitled Together at Christmas, took place on Wednesday and will be broadcast on ITV on Christmas Eve.

The service ‘recognised, celebrated and brought together’ those who have done incredible work in their communities and was themed around the concepts of love and compassion, community and togetherness.

EACH was asked to nominate a small number of ‘unsung heroes’, in particular those who have gone above and beyond during the pandemic, and among those to be selected were Norfolk-based Brad and Debbie McLean, who received bereavement counselling after son Stanley died when just 18 months old in 2012.

Every year on Stanley's birthday, the couple choose to pay for a day of care and support at EACH through their incredible fundraising efforts. This year, the family's annual golf day in memory of Stanley raised £22,000 and in October Brad ran the Cambridge Half Marathon, raising a further £1,300.

Over the years the family has raised over £65,000 for EACH and tireless Brad became a trustee in 2016.

Brad said: “It was very special – a once-in-a-lifetime experience.

“Westminster Abbey is a remarkable building. Just being in a place steeped in so much history was incredible, let alone being part of the actual service.

“Christmas can be difficult for us but this was a lovely, happy experience to share as a family.”

Joining Brad, Debbie and sons Gus, eight, and Otis, five (pictured left to right above) was Cambridgeshire’s Stuart and Carla Delf, who received support from EACH during the life, and following the death, of son Fraser.

Fraser’s brother, 15-year-old Stuie, also receives support and during the pandemic raised an incredible £17,000 by running 5k every day in May 2020.

He took on the challenge in memory of his brother and later raised more funds with his football team. Communities from across the region and beyond have been touched by his fundraising story, with donations flooding in from as far as the United States.

Stuart said: “It was a wonderful evening and great privilege to be part of such a very special occasion, among such incredible people.

“There were so many highlights, especially seeing The Duke and Duchess.

“Stuie really enjoyed it, too, and found the service quite emotional.”

Suffolk-based John Skoyles, a fundraising volunteer for three years, was also on the guestlist.

John volunteers for EACH’s Help at Home service and has provided numerous one-off support to families, as well as helping with weekly PPE runs across East Anglia.

“What an amazing experience,” said John.

“Being invited was an absolute privilege and I ended up sitting just four or five metres from The Duke and Duchess.

“I’ve never seen so many TV cameras in my life and will look forward to reliving the service when I watch it on Christmas Eve.”

The TV coverage will feature additional footage, shining a spotlight on individuals and organisations who have achieved incredible work in their communities.

The Duke of Cambridge was also in attendance. Leona Lewis and Ellie Goulding both sung and there was a special reading by TV presenter Kate Garraway.