A study with early intervention mental health service CAMEO at Cambridgeshire and Peterborough NHS Foundation Trust (CPFT) has found that sixty percent of people cared for in their first episode of psychosis recovered well. 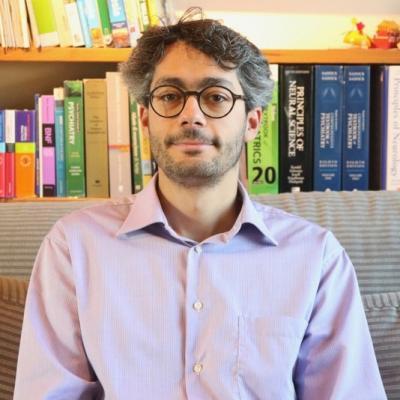 Psychosis is a mental health condition characterised by problems with perception and thinking, such as hallucinations and strong false beliefs (delusions). The CAMEO team specialises in identifying and treating this condition as early as possible to support people through their first experience, before they are discharged to their GP or CPFT’s community mental health services for further care.

The research team led by consultant psychiatrist and Wellcome Trust Fellow Dr Golam Khandaker used CPFT’s Research Database to review blood markers and health outcomes for CAMEO service users, in a longitudinal study of anonymous patient records between January 2013 and November 2019. The study results have been published in Brain, Behaviour and Immunity.

Lead author CPFT psychiatry registrar Dr Emanuele Osimo (Pictured) said: "We wanted to know how well people do overall, and if demographics, clinical measures and blood tests taken when people develop psychosis can be linked to how well people recover after receiving care for their first episode of psychosis.

“CPFT’s Research Database provides an ethically approved, secure source of anonymous information about service users who have not opted out of their data being used for research.
It enabled us to review 749 people who were cared for by CAMEO between 2013 and 2019 and completed their treatment pathway.

“We found that around sixty percent of people with first episode psychosis recovered well enough to be discharged to their GP. Several blood markers were consistently higher or lower in other people who required long term specialist psychiatric care. These included types of white blood cell (immune markers), and measures of metabolic health.”

This is one of the first studies in the UK to measure these associations in a large group of people, using a broad set of blood tests for biomarkers which can signal physical health issues underlying mental health conditions.

Emanuele added: “Our results suggest that blood tests may help in future to predict outcomes for people experiencing their first episode of psychosis, and help us find more effective treatments for those who don’t recover so well. We now need to replicate our results in other groups, and develop clinically useful tools for predicting long term mental health outcomes and improving care pathways.

“I would like to thank all the CPFT patients who kindly allowed the use of their anonymous data for this important research, and the clinical staff who have collected, processed, and recorded all the samples and information.”

CAMEO clinical lead Professor Jesus Perez said: “This study used real world clinical data to review the impact of care provided by CAMEO. It reveals that a high proportion of our service users, that could have ended up with a chronic disability, now have a good long term clinical outcome after receiving early mental health treatments, including psychological therapies, medication, occupational therapies and general one to one support.”

CPFT’s CAMEO service has also been recognised as one of 26 global centres of excellence for psychosis care, and was recently awarded $1.3 million to join a major international research partnership investigating new treatments for schizophrenia.