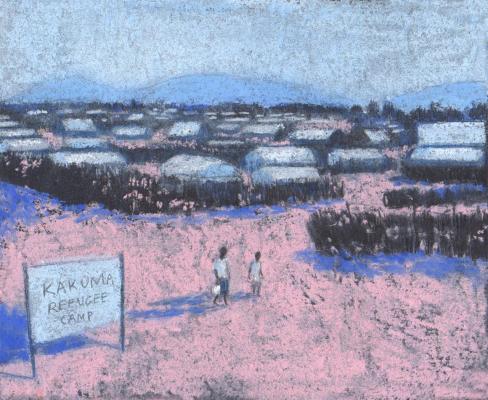 The prestigious V&A Student Illustrator of the Year prize has been awarded to an Anglia Ruskin University (ARU) student for the fifth successive year. 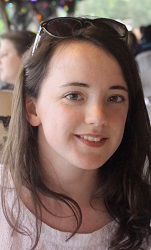 Sally Dunne (right), who graduated earlier this year from the MA Children’s Book Illustration course at ARU, received £3,000 after being named as the leading student at the annual V&A Illustration Awards, organised by the world-famous design museum.

The victory continues ARU’s remarkable run of success at the V&A Illustration Awards, with students from the Children’s Book Illustration MA course having won the Student Illustrator of the Year category for the last five years (2016-2020).

Sally, who is originally from Ireland and had also studied for a BA (Hons) in Illustration at ARU, impressed the judges with her work Home in Kakuma Refugee Camp (above), which highlights both the vibrancy of the camp and the difficult lives of the people living there.

Vyara Boyadjieva, from Bulgaria, who graduated from ARU alongside Sally earlier this year, received £2,000 after being named as the student runner-up, while ARU’s Kate Winter and Laura Winstone were both highly commended by the judges.

The V&A Illustration Awards have been running since 1972 and previous winners have included Sir Quentin Blake, Ralph Steadman and Posy Simmonds.  Prizes are presented in four categories and this year Eva Eland, another recent ARU graduate, claimed the V&A’s Book Cover Award.

Eva, who graduated from the MA Children’s Book Illustration course in 2018, won the £3,000 prize for her debut picture book When Sadness Comes to Call (Andersen Press).  The Book Cover Award was judged by Bonnie Greer, playwright, novelist, critic, and broadcaster; Ren Renwick, CEO of Association of Illustrators; and Dr Tristram Hunt, Director of the V&A.

Martin Salisbury, Professor of Illustration at Anglia Ruskin University (ARU), said: “We are absolutely thrilled that Sally and Eva have been recognised by the V&A.  Sally’s success is the fifth year in succession that one of our students has won the V&A’s Student Illustrator of the Year award.  This is an extraordinary outcome and is testament to the tremendous standard of our students here at ARU.”

Dr Tristram Hunt, Director of the V&A, said: “The V&A Illustration Awards celebrate outstanding creativity by working artists, who use the fierce power of illustration to illuminate all the complexity of contemporary human experience.  The winning entries speak perfectly to the V&A’s founding mission to support artists, embed design in everyday life, and showcase imaginative brilliance.”