LightPointe has announced the introduction of a new point-to-point backhaul product. The AireStrata G includes exclusive LightPointe developed features for businesses, carriers and government agencies, including simultaneous 4-beam transmission and reception with auto-tracking, and flexible fiber interface options for a multitude of 4G/LTE telecom, data and video networks. 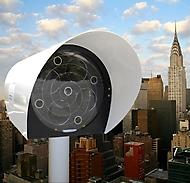 Free Space Optics technology is enjoying a renaissance in the backhaul sector, due to ever-increasing congestion in radio frequencies, the ability to deploy worldwide without licensing delays or costs, and dramatic increases in performance and reliability associated with 4th generation optical technology which is regarded as the most secure point-to-point communications solution available. The AireStrata G is virtually impossible to intercept, which makes it ideal for financial, medical, government, military and other sensitive applications.

“The AireStrata G adds several features that make the links more flexible and easier to operate in a multitude of networks,” said Heinz Willebrand, president and CEO of LightPointe. “The AireStrata G builds on the success of our FlightStrata Series, which has been proven in the most demanding enterprise and carrier applications around the world. With the AireStrata G, we’ve added multiple fiber and copper interfaces, an integrated and user programmable Layer 2 Ethernet switch, an advanced integrated in-band or out-of-band web browser and SNMP-based management platform, and high quality German optical-grade lenses. Aside from carrier applications, the AireStrata G can be deployed in private networks, from hospitals to school systems to military theater of operations, where it is essential that transmission be undetectable.”