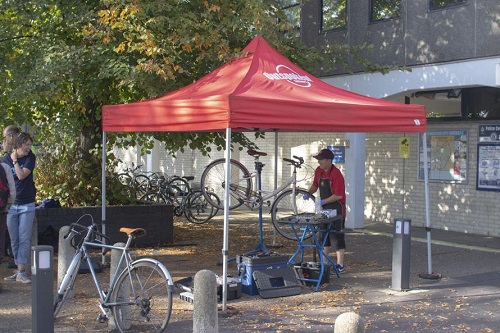 Thousands of people have been taking to two wheels as part of Cycle September – and covered more than 220,000 miles.

Over 2,000 people in Greater Cambridge have used their bikes for over 28,000 trips – saving approximately 87,000lbs of carbon dioxide emissions.

Cycle September is a competition run by cycling champions Love to Ride on behalf of the Greater Cambridge Partnership to see which workplaces can get the most staff to ride to work.

Owlstone Medical based on the Science Park are currently global leaders for a business their size.

Aimee Harper, from the Owlstone Green Committee, said: “The green committee at Owlstone were looking for ways to encourage more staff to cycle to work, and the Cycle September promotion has provided a great way to achieve this.

“It has created quite a buzz around the office, especially since we took first place! It has served as a great motivation for people who have been meaning to start riding, but needed that extra push, and also provided opportunities for social events, such as the social cycle we will be hosting soon.”

This week, dozens of people had their bicycles checked over during Dr Bike cycle maintenance sessions at Owlstone and Parkside Police Station in the city – one of a number of cycling initiatives laid on as part of Cycle September, the Global Bike Challenge.

Those taking part can win prizes such as a champagne punting trip, a new bicycle or a £100 shopping voucher – for more information or to sign up visit: lovetoride.net/cambridgeshire