A remarkable World War II-era RAF Watch Office has been restored at Alconbury Weald near Huntingdon. 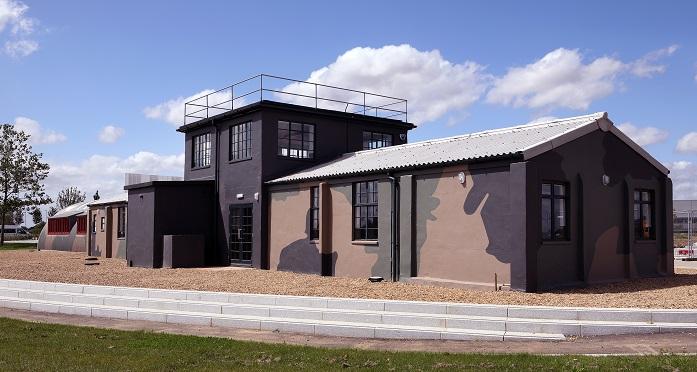 The Grade II listed building has been transformed by Urban&Civic, the master developer at Alconbury Weald, and the Watch Office will soon be home to a library, community and heritage space.

Built in 1940-41, the Watch Office was the first permanent control tower at Alconbury Weald, a former RAF airfield that operated between 1938 and 1995. It served as a central operations building and was later replaced with Building 120, an ‘All Stations’ Watch Office.

The Watch Office is an outstanding example of a standard-type build for bomber satellite stations during the Second World War. Only 214 were built in the UK in total, with just a handful remaining.

From the earliest consultations and vision for the development, the building formed a central and defining feature of the first phase of development: providing a physical historical link to the Second World War role of the former RAF airfield, which is growing into a thriving community of homes and businesses. The painstaking restoration has taken almost a year to complete. The process involved the installation of Nissen hut roof cladding, a prefabricated steel structure for military use made from a half-cylindrical skin of corrugated steel.

Protected by a Listed Building Consent, the Watch Office had to be restored in the same manner it was originally built. This presented a huge range of construction challenges, not least because the building had suffered wide-ranging incendiary damage in 1943 when a bomb accidentally exploded as crew members loaded B17 Flying Fortresses from 95th Bomb Group preparing for their next mission.

Original features of the building have been retained or reinstated where possible, including external stairs, timber door sets, original walls and flooring, a roof access ladder and the roof balustrade. Having also been used by American servicemen, the building features American electrical sockets alongside British counterparts, and these have also been reinstated.

Meanwhile, a specialist blacksmith from the Midlands was commissioned to restore a significant external staircase. The staircase had a set of unique treads which were an improvised fix on the building. Known as Marston Matting the treads had completely eroded over the course of time and have now been painstakingly recreated, breathing new life into this period feature.

The result is an outstanding and poignant space: with modern conveniences for the new community, but all echoing and preserving as much of the original building and traditional features as possible, to ensure it can be appreciated by many generations to come.

Discussing the restoration, Nick Armour, Local Conservation Officer at Huntingdonshire District Council, said: “It has been an honour to work on a restoration project of such high historical significance. We are pleased that Urban&Civic has integrated this fine example of war-time architecture into the masterplan, ensuring it benefits the community by raising awareness of the heritage of the site and providing new facilities”.

Rebecca Britton, Head of Communities and Partnerships at Urban&Civic, added: “The opening of the restored Watch Office is a major milestone, and we couldn’t be happier to see this important heritage building back on its feet. It’s been hard work, working through with Nick how to save as much of the original building and features as possible, while ensuring it is warm, dry and suitable for modern day uses. Now we have the chance to put in some of the heritage story that is such an important part of Alconbury Weald.

“Sitting as it does in a venerated position – within Memorial Green and opposite the Cricket pitch – it is truly at the heart of the first phase and our commemoration of the airfield’s role in the Second World War. More than anything though, the restoration enables the new community to use and have a sense of ownership of that history, and it is exciting to see the range of community events and activities already booked in to use the space: from pilates to toddler gymnastics, and we continue to work with residents and the Library Service to develop our initial library provision on the development. It has a real opportunity to become a vibrant cultural and heritage hub – not just for Alconbury Weald but for the wider area.”

Alconbury Weald, five miles from Huntingdon, is about more than just homes. The growing community already has a range of facilities including Ermine Street Church Academy primary school, a café and gym, a community park, and extensive neighbourhood play areas.

As it grows further, the plans include:
• Two more primary schools and a secondary school
• A further 2 million sq ft of business space, on top of the 1 million sq ft already delivered, as part of the next stage of the development
• A new health centre, alongside shops and services
• More than 600 acres of woodland and green space and 52 acres of formal spaces and sports pitches
• Extensive transport links, including cycle links, prioritised bus systems to Cambridge, Huntingdon and Peterborough, and potential for a new Alconbury Weald railway station on the East Coast Mainline

Over the next 15 years, the site will be developed in key phases, each of which will provide further facilities and benefits as the community grows.

About Urban&Civic
Master Developer Urban & Civic is currently bringing forward 5,370 acres of land predominantly within 100 miles of London through its fully serviced land parcel model. It is renowned for creating homes, spaces, places and communities, making sure that the impact of change is positive for all involved. Infrastructure and amenities that people want, from parks and schools to bike lanes and access roads, are always top of its agenda.

Urban&Civic are the owners and developers of Alconbury Enterprise Campus: the Government-backed Enterprise Zone established in 2011 to create nearly 3 million sq ft of high quality low carbon business space for production, R&D and offices to the North of Cambridge. ...