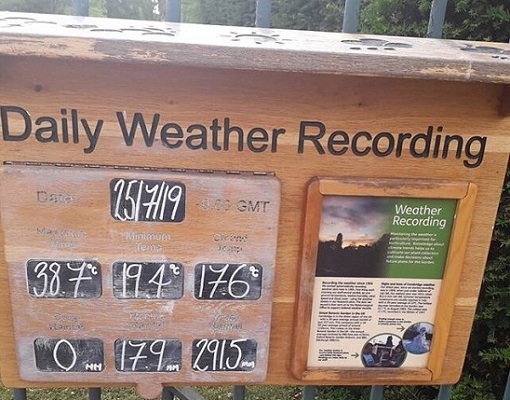 Cambridge University Botanic Garden Director, Beverley Glover says: “We are really pleased that our careful recording of the weather, something that we've been doing every day for over 100 years at the Botanic Garden, has been useful to the Met Office in defining the scale of this latest heatwave. Our long history of weather recording is very important to researchers analysing climate change. However, we can't help but feel dismay at the high temperature recorded and the implication that our local climate is getting hotter, with inevitable consequences for the plants and animals around us.”

Katie records the Botanic Garden’s weather readings from the previous 24 hours early each morning before forwarding the information onto the Met Office.

Katie says: “When I scrolled through the recordings on Friday morning, I saw straight away the temperature increase and the high reading but never in my wildest dreams did I think it would be the ‘highest ever’ moment.”

She continues: “It was a bittersweet moment, as although it was exciting, I was also shocked by the result and the potential environmental consequences.”

On Monday afternoon, Phil Johnson, SE England Met Office Regional Network Manager, carried out a climate inspection at the Garden's weather station to verify the reading. This included checking the weather station instruments against Met Office precision equipment. Based on his report, the Met Office have confirmed the 38.7 degree C recording is now officially the highest temperature ever recorded in the UK. This figure exceeds the previous record of 38.5°C recorded in Faversham, Kent, in August 2003.

Beverley continues: “It did feel incredibly hot in the Garden on Thursday. We had to close our Glasshouses, because they were too hot to bear, and we sent our horticultural team home early because they were all melting. It was noticeable that our visitors were all hiding in the shade, or else eating ice-creams in our Café!”

Analysis of the Garden’s weather records show that over the last 100 years our average temperature has risen by 1.2 Celsius and the hottest day, highest monthly and yearly average have all occurred within the last 20 years. The highest ever temperature recorded at the Garden before this new record was 36.9 C, recorded on 10 August, 2003.

Beverley continues: “Our driest year since we started recording was in 1996 when just under 400mm of rain fell. Last year we had another incredibly dry and challenging summer, and to have experienced the intense heat and storms this summer really highlights how dynamic the climate is. As our Head of Horticulture Sally Petitt says, to have recorded the highest UK temperature serves as a further reminder that we all need to be taking climate change and its impacts seriously.”

The Garden maintains the University’s collection of over 8,000 plant species from all around the world, including one of the region’s finest collections of trees, all set across beautifully designed and landscaped gardens and glasshouses. Highlights include striking seasonal colour in the Winter and Autumn Gardens; the richly fragranced Scented Garden; colourful Bee Borders; a relaxing Woodland Garden and Lake. Alpine and tropical plants in the Glasshouse Range are also perfect for a cold day’s visit.

The Garden offers year-round inspiration for gardeners and is an exciting introduction to the natural world for families. A number of events are held throughout the year as well as adult courses and workshops.

For visitor information and admission pricing please visit www.botanic.cam.ac.uk or call 01223 336265. Garden opening times during February, March and October are 10am-5pm and from April – September 10am-6pm; 7 days a week.