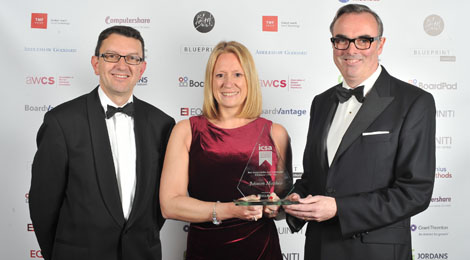 Johnson Matthey has been awarded ‘Best Sustainability and Stakeholder Disclosure in the FTSE 100’ by the Institute of Chartered Secretaries and Administrators.

The awards ceremony took place Wednesday 12 November 2014 at The Brewery in London and celebrated the highest standards in governance, rewarding teams and organisations for their achievements.

Johnson Matthey managed to beat off tough competition in this category from some major FTSE 100 companies, including Unilever, Randgold Resources and Mondi. But this is not the first time Johnson Matthey has been recognised by the Institute of Chartered Secretaries and Administrators (ICSA) for its sustainability reporting, in fact this is the third time in four years it has claimed this coveted prize.

Johnson Matthey has won the award three times in the last four years.

The ICSA is a much respected authority in the UK on corporate governance and compliance. The entries for the ICSA Excellence in Governance Awards 2014 are judged by an independent panel of judges, all highly experienced in company secretarial and governance fields, spanning private and not-for-profit sectors.

Johnson Matthey has remained ahead of the game in reporting and since 2012 has integrated its financial and sustainability reporting into one document, showing how it measures performance not only according to profitability but also by sustainability factors.

Reporting is far more than a statutory duty and Johnson Matthey is using it as an opportunity to show all its stakeholders, as well as its shareholders, how sustainability and financial reporting are two linked elements of a successful business that contributes both to the economy and to society.