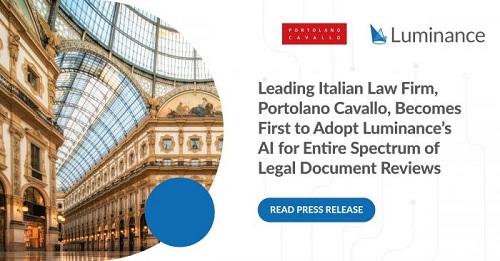 The firm, which has offices in Milan, Rome and New York and was voted ‘Italian Law Firm of the Year’ at last year’s The Lawyer European Awards, will now have access to Luminance’s world-leading AI for any kind of legal document review.

As a firm keen to lead the pack when it comes to innovation, Portolano Cavallo had already been using Luminance’s machine learning technology for five years to accelerate reviews on executed contracts such as M&A due diligence and property lease reviews, or AI-powered analysis of extant documents in eDiscovery matters. Now, the top-ranked firm has also adopted Luminance’s latest product, Luminance Corporate, which uses AI to help lawyers and organisations with the pre-execution contractual stages of drafting and negotiation. This makes Portolano Cavallo the first organisation in the world to make AI available to its lawyers for the entire spectrum of legal document reviews.

Luminance’s newest product, Corporate, is the only technology that can take a first-pass review of incoming contracts: when users open a contract in Word, Luminance automatically colour-codes the clauses according to how compliant or risky they are compared to an organisation’s desired standards. Luminance can also instantly swap out non-compliant language for terms that have already been approved or previously used, allowing lawyers to negotiate swift, compliant contracts and gain a competitive advantage in negotiations.

Stefano Ceolin, Chief Innovation and Digital Officer at Portolano Cavallo, said: “For years Luminance’s technology has been a core tool for our due diligence review in M&A transactions and in support to the process of investigation and litigation, improving quality and efficiency of our work and freeing up our lawyers’ time to focus on high value and strategic tasks. Now, with Luminance Corporate, we can exploit its powerful machine learning capabilities also while drafting and negotiating agreements on behalf of our clients. The platform provides our team with artificially augmented skills to review incoming contracts leveraging its remarkable insights”.

Eleanor Weaver, CEO of Luminance, said: “We are delighted to expand our long-standing partnership with Portolano Cavallo. Luminance Corporate is a revolution in AI-powered document review and legal process automation, and will transform contract drafting and negotiation for firms and in-house teams around the world.”

Luminance is currently used by over 400 organisations in 60 countries worldwide, including all of the Big Four consultancy firms, a quarter of the world’s largest law firms and in-house teams from leading organisations such as UK supermarket, Tesco, and global confectionary company, Ferrero. The platform is used by organisations working in over 80 languages.