Local Robogals team up with Amazon Cambridge for inspiring event

A Cambridge team that’s part of a global organisation dedicated to encouraging girls to embrace science, technology, engineering and maths (STEM) has announced the launch of a special event with the nearby Amazon Development Centre. 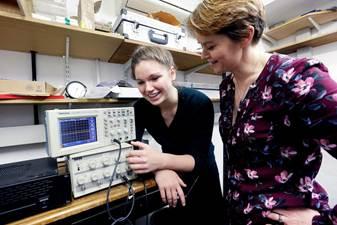 Robogals is an international, student-run organisation that aims to inspire, engage and empower young women to study in STEM fields. Robogals offers interactive, engineering-based workshops for girls aged between 8-18 all around the world.

The Robogals team at the University of Cambridge’s Department of Engineering is teaming up with Amazon Development Centre Cambridge for a range of activities over the coming months.

The organisations are hosting a skill-a-thon event for girls and boys aged 14-16  this Saturday (March 11th) at the Amazon Development Centre that will mix theoretical and practical demonstrations and learning from Robogals and the Amazon team, teaching young people about the magic behind some of most cutting edge technology in the world.

The event will focus on Amazon’s Alexa, the cloud-based voice service that powers Amazon Echo and Echo Dot.

The session will include a hands-on coding exercise with a team member from Robogals and Amazon who will work with the local girls and boys to build a skill for Alexa—a capability that can be controlled or interacted with via voice. The end result will be new functionality added to the Alexa service, which can then be accessed via Amazon’s voice-controlled speakers, Amazon Echo and Echo Dot.

To celebrate the event, members of the Amazon Cambridge team visited Robogals HQ this week to deliver a £1,000 donation, which will be used to purchase new equipment that will help the group continue its work in the community.

The donation was delivered to Robogals HQ at the University of Cambridge in the run up to International Women’s Day yesterday (March 8th), and forms part of the Amazon in the Community programme where the company supports communities in and around where it operates in the UK to help children reach their potential in the digital world.

David Hardcastle, Senior Manager at Amazon’s Cambridge Development Centre, commented:“At Amazon we share Robogals’ passion for helping to inspire the next generation of STEM creators and innovators. This event will demonstrate how you build exciting new experiences around voice, and is just the beginning of a wider programme we’ll run together with Robogals. Our team is hugely excited about what we can help young people from our local community learn and achieve.”

Jenny Sidey from Robogals added: “It’s fantastic to partner with the team at Amazon in Cambridge. Some of the company’s most exciting innovations are worked on right here in the city, and the girls who are part of the local Robogals network will benefit immensely not just from the event and donation, but from our wider partnership with Amazon. On behalf of everyone at Robogals in Cambridge, I’d like to say a big thank you to Amazon for this support.”

At the Cambridge Development Centre, the Amazon team works on continually improving the knowledge systems within the Alexa voice service. Other Cambridge-based projects include Prime Air, a delivery system designed to get packages to customers in 30 minutes or less using drones.