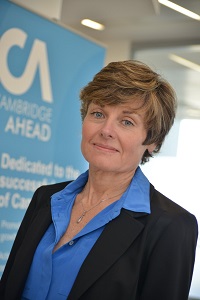 Cambridge Ahead, the business and academic member organisation dedicated to the successful growth of Cambridge and its region in the long-term, is delighted to welcome London Stansted Airport to its membership.

Stansted Airport serves over 28 million passengers per year and offers a European route network which is unrivalled in the UK, providing the East of England and London with more visitors from Europe than any other airport. It is also the only major London airport with significant full-length runway capacity, offering airlines the opportunity to grow.
In addition to an extensive European route network, early July saw the start of a second daily Emirates service to Dubai which will enable the airline to increasingly meet the steady demand from both leisure and business travellers to and from the region, as well as international student traffic to Cambridge. The airport has also announced recently that in the next five years it is aiming to secure direct services to at least 25 new long-haul destinations around the world, with a strong focus on the Far East, India, North America and the Middle East.

The economic health of Cambridge was an important factor in the decision by Emirates to first place the Dubai service at Stansted in June 2018 and its popularity convinced the airline to increase this service to twice daily earlier this month. Approximately half the passengers on each aircraft are travelling to Dubai with the other half connecting onwards to the 150 destinations available from Dubai.

Given the proximity of London Stansted to Cambridge, its ability to develop and service additional routes, including long haul, is a key component in the continued sustainable development of Cambridge as a world-class city. As such the objectives of London Stansted and Cambridge Ahead in terms of a shared ambition to make the Cambridge region a place where business continues to thrive are very much aligned.

Jonathan Oates, Corporate Affairs Director, London Stansted Airport commented: “Stansted Airport sits at the heart of one of the most dynamic and affluent regions in the UK and the combination of the significant investment we are making in our facilities and our spare runway capacity will ensure that we can play an ever-increasing role as an economic catalyst for Cambridge.

“We look forward to working with Cambridge Ahead and its members to help shape our ongoing evolution and thinking and ensure that it is aligned with their global aspirations.”

Jane Paterson-Todd, CEO, Cambridge Ahead (pictured) added: “I am delighted to welcome MAG to the Cambridge Ahead membership. This partnership gives Cambridge’s key sectors an opportunity to work much more closely with London Stansted to support future air travel needs. With Stansted’s close proximity to Cambridge, it is ideally located for many businesses that have increasing  requirements for longer-haul flights.  Our new relationship will also enable further collaboration and data sharing between London First, Stansted and ourselves, to move forward discussions around the additional infrastructure investment required along the corridor between Cambridge and London.”

Cambridge Ahead’s current membership includes some of Cambridge’s most influential organisations, including Arm, Frontier, the Wellcome Sanger Institute and the University of Cambridge. The 40 members represent a working population of approximately 50,000 people in the Cambridge area.

Cambridge Ahead aims to promote sustainable economic growth and quality of life.  It does this by commissioning and highlighting independent economic research and working with local and national government and other informative groups to further its aims. The organisation highlights both the opportunities and needs of the region by collecting and maintaining data, analysing topics and contributing to policy.