Marshall celebrates high fliers and the milestone of 50,000 vehicles leased 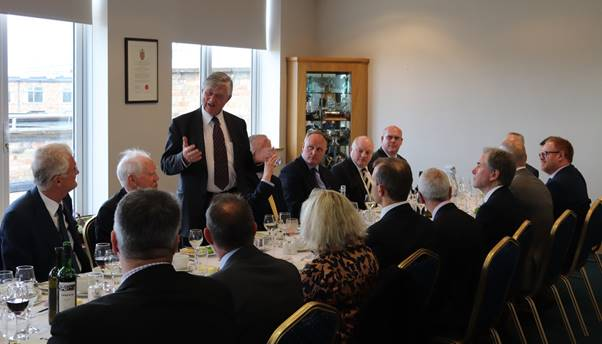 Dr Taylor, who is the inventor of the famous Corpus Chronophage Clock in Cambridge, has been a pilot for 65 years, and Sir Michael has been in the aviation industry and a pilot for 70 years.

The event was hosted by Marshall Leasing and sponsored by the leading Vehicle Telemetry and connected camera company, Matrix Telematics. Marshall Leasing, which is now part of the Bank of Ireland (Northridge Finance Division), was previously owned by Marshall Motor Group who were represented at the event, along with a significant number of fleet customers.  Various vehicle manufacturers were also there to strengthen their relationships with Marshall Leasing, which is in the process of launching its personal contract hire (PCH) proposition to the fleet market.

Toasts were led by Air Commodore Gordon Moulds CBE DL, who previously held high office in the RAF.  He now runs Kids Out, a charity dedicated to bringing fun and happiness to the lives of disadvantaged children.  Marshall Minibus, a subdivision of Marshall Leasing also attended, celebrating their recent success in the school minibus sector.  Marshall Leasing’s Jonathan Ross addressed the audience and celebrated reaching a combined leased fleet of 50,000 vehicles.

In addition, Dr Taylor spoke to engineers and apprentices about his life as an inventor and his innovative invention of the ‘Otter G’ switch, which is a vehicle motor protector, thermal safety cut-out and thermostat.

Sales and Marketing Director of Marshall Leasing, Jonathan Ross said “We’ve celebrated the leasing of 50,000 vehicles which is a phenomenal achievement.  It is 29 years since Peter Cakebread and I took on the challenge, and Marshall Leasing has been supported by the Marshall family throughout.  It seems highly appropriate to mark this milestone in Marshall Leasing’s history at Cambridge airport with an array of such special people, as we celebrate our past and look to our future.”

Sponsoring the event, Matrix Telematics’ Sales Director, Phil Powell said “This fantastic event at Cambridge airport is about celebrating Marshall Leasing’s amazing achievements, but also shows our commitment to supporting the relationship which has blossomed over the last couple of years.”

Marshall Leasing’s Managing Director, Peter Cakebread said “We have a great heritage, and we have worked hard with Northridge Finance to ensure that we retain the key values which have made Marshall Leasing stand out.  We have always taken an innovative approach to our business so it’s fantastic to be honouring two of Britain’s most entrepreneurial businessmen here today.”

Marshall Leasing operates a fleet of over 8,000 vehicles.  Throughout the past twenty-five years, their journey from fledgling company to award-winning national fleet operator has been charted by the current senior management team.  Their heritage and experience in fleet management and finance lies at the heart of their customer-focused operation.  Marshall Leasing was voted ‘Fleet News Leasing Company of the Year sub 20,000 vehicles’ in 2018.