This week, Marshall Centre was lucky enough to welcome a new member of staff to join its Aviation Excellence team.  Steve Burns brings with him a wealth of knowledge and experience both working on aircraft and as a Technical Trainer. 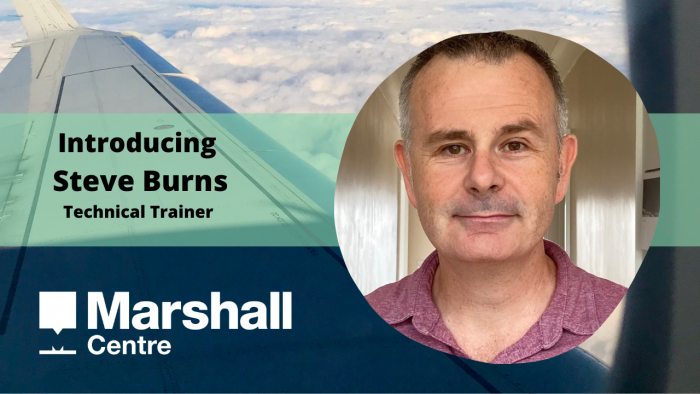 Steve joined the Technical Training team working under David Firth where he will provide C-130H and C-130J Mechanical (B1) Type training and support Marshall apprentices on their journey to become competent to work on aircraft themselves.

We asked Steve to tell us a bit more about himself:

Originally from Kilmarnock, Scotland. Arguably famous (ish) for its football team. If I’m honest, it’s famous as the home of Johnnie Walker whiskey and the “Killie” pie.

I joined the RAF as an Airframe mechanic at 16 after passing my A-levels. I stayed in the RAF for 25 years where I qualified as an Airframe and Propulsion technician and worked on Tornado F3, Tornado GR1, Hawk, Puma and finally Hercules C-130K and C-130J in 2005. I joint managed the RAF C-130J Primary Maintenance team until the introduction of HIOS whereupon I moved into the C-130J training school as an instructor; a role I thoroughly enjoyed.

When RAF Lyneham closed, I moved to RAF Brize Norton and managed the C-130J Line Training School before finally joining the C-130J Delivery team at Marshall Aerospace, Cambridge where I helped to set policy and guidance for the RAF C-130J fleet. From there, it was an easy move to civilian life in 2014 when I moved one desk to the right and adjusted to life outside the RAF.

Upon learning of a possible Technical Learning Facilitator post, I jumped at the chance of moving across to Marshall Centre. I’m really looking forward to the challenge as it will be great to move back to supporting students. I’ve missed the interaction and satisfaction that comes from passing on knowledge and watching former students flourish.

Outside of work, I enjoy cycling and car detailing (it is actually a thing) and I’ve recently taken up a version of golf. It’s like normal golf but played badly while swearing.

Steve has hit the ground running and has been a positive addition to the team already!

Click here to find out more about our Aviation Excellence offering.