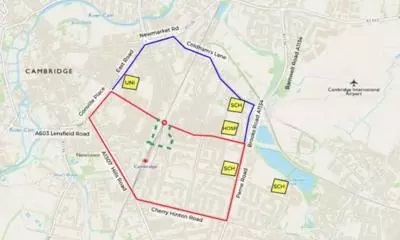 A survey launched yesterday (Monday 9 November), to find out what people think of the trial closure of Cambridge's Mill Road Bridge to all traffic except for buses, cyclists and pedestrians.

In the summer, Cambridgeshire County Council acted quickly in response to the Covid-19 pandemic and made changes to this busy high street to help people social distance and encourage locals to travel actively by bike or on foot.

The temporary bridge closure, which acts like the bus gates in the city centre, was put in under an Experimental Traffic Regulation Order (ETRO) which enables changes to road layouts to be made quickly and amended as needed in response to current events.

While the whole of Mill Road remains accessible to motorists, these trial measures mean they can no long travel over the bridge. The bridge closure is enforced with cameras. Over 20 signs have been put up along Mill Road and on nearby streets warning drivers about the new road layout. All money received from fines is invested in frontline highways works like fixing potholes or improving road safety.

Separate to the trial bridge road closure and like other local high streets, white and red ‘build outs’ have been put in at locations along Mill Road to extend the footway and help people social distance when walking along the high street.

Chair of the Highways and Transport Committee at Cambridgeshire County Council, Councillor Ian Bates said: “We’ve heard from over 300 Mill Road traders and nearby residents – and it’s clear that there are strong opinions for and against closing the bridge to cars, vans and lorries in favour of buses, cyclists and pedestrians.

“We’re offering this extra opportunity to let us know your views via a short survey as part of the six month consultation period on the trial closure. I hope that this will encourage even more people, perhaps those who might not otherwise choose to write in, to let us know their thoughts about the future of Mill Road. We’ll be closely considering all the feedback we’ve received whether it is via emails, letters or this survey when it comes to making a decision.”

People will now be able to have their say via a survey from now through to 24 December on the Cambridgeshire County Website.

A consultation has been running alongside the six months of the road closure with feedback invited in writing to policyandregulation@cambridgeshire.gov.uk

Views and information gathered in the survey will be added to the feedback which has already been received and made available to Councillors as they decide what to do next following the trial bridge closure.

A decision on whether to continue the trial, make it permanent or reopen the bridge will be made by the Council’s Highways and Transport Committee next year.