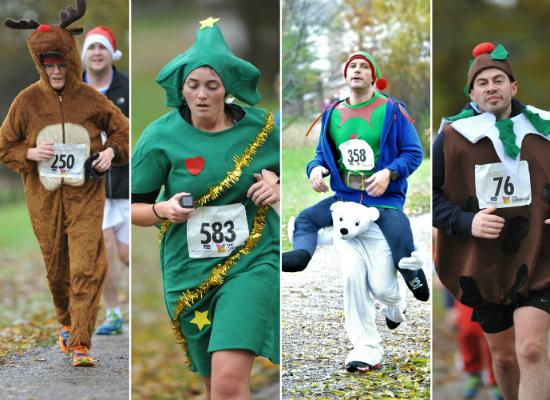 Arthur Rank Hospice’s 6th annual Ely Festive 5K brought some timely seasonal merriment to the streets of Ely last Sunday morning, as around 530 runners – many in seasonally themed fancy dress – took on the fun run with their family, friends and colleagues. It is hoped that in the region of £12,000 will have been raised for the Hospice, which has just moved to its new home at Shelford Bottom.

Despite allowing for a 50% increase in runners from previous years meaning six hundred places were available this year, the 5K sponsored by Ward Gethin Archer and the Cambridge Building Society, sold out nearly two weeks early. Despite a stormy previous night, the day was not as cold as previous years and fancy dress outfits brought some wonderful colour and cheer to the grey morning, complete with a polar bear, several pairs of bright pink fairies, an inflatable snow man, lots of elves and the odd Christmas tree, making their way around a route which took in Ely Cathedral, Cherry Hill, Lavender Gardens and the Country Park. Upon their return to Ely Market Square, participants were presented with medals, heard live music from Sing! Choirs and were treated to mince pies and mulled wine, served up in the nearby offices of Ward Gethin Archer.

The Dog Bathing Company won the trophy for Best Fancy Dress Outfit with their dog and cat themed outfits, complete with mini-bath on wheels! Once race times were verified through chip timing, it was confirmed that Ben Morris was fastest man in 18 minutes 31 seconds, Lauren Thomas claimed fastest woman in 22 minutes 41 seconds (with Lara Edwards a close second in 22 minutes 45 seconds) and Ely Tri Club were fastest team for the third year consecutive year with a cumulative team time of 1 hour 17 minutes and 46 seconds. In the under 16s category Alex Oakhill won the male category with a time of 21 minutes 16 seconds and Isabelle Gowler, from the Stretham Community Primary School team took the title for fastest female under 16, in 26 minutes 26 seconds.

As always – the focus was on firmly on fun - with spectators cheering on local entrants including Slimming World Ely, Thera East Anglia, The Beauty Loft Ely, Bodymode Running Club, Cambscuisine, Morrisons, PIRL, Ely Runners, Littleport Runners, Atrium alongside the more creatively named such as The North Pole Dancers, Oh Oh Oh It’s Quite Chilly, The Naughty List and The Weirdy Beardy (not so) Wise Women!

Lara Edwards, who was this year’s second fastest woman and was taking part for the first time and said: “I’ve recently moved over to Ely and joined the Tri Club about two months ago, and this was my first run – well there was a potato race - but this was my first 5K! It started off a little bit rainy but it cleared up and it’s been amazing. I love the atmosphere: the choir’s amazing, the organisation was great and seeing so many people turn up, especially in fancy dress was brilliant! The fastest man was wearing a Santa outfit and I also saw a guy dressed as a dog which was hilarious. I’d like to thank the guy in an orange shirt who kept me motivated the whole way. I’ll definitely be back next year – this might have to become a routine every November!”

Arthur Rank Hospice Charity would like to extend a huge thank you to all those who took part and made the event such a delight to run (!) including every individual participant and team; sponsors The Cambridge Building Society and Ward Gethin Archer; Ely Markets and East Cambridgeshire District Council who were kind enough to share the market place; Angela from Feel Good Fitness for the warm-up; Marks & Spencer’s Beehive Centre Cambridge and the many volunteers who supplied or baked the much appreciated mince pies; Peacocks Tearooms Ely for providing homemade mulled wine; Hawthorn for the loan of sound equipment; Ely Cathedral for their cooperation; Star Radio for their event support and promotion; Quy Mill Hotel & Spa who provided some wonderful Afternoon Teas and Sunday Roasts for the prize winners; and the many fabulous Arthur Rank Hospice staff and volunteers who helped with the route, refreshments and general administration on the day.

Sponsorship monies raised by Ely Festive 5K runners are still being sent to the Charity, so the total funds will be announced in due course. In the meantime, further photos from the event can be viewed in the photo album section of Arthur Rank Hospice Charity’s Facebook Page (please ‘like’ the page to access).