National Day of the People's Republic of China 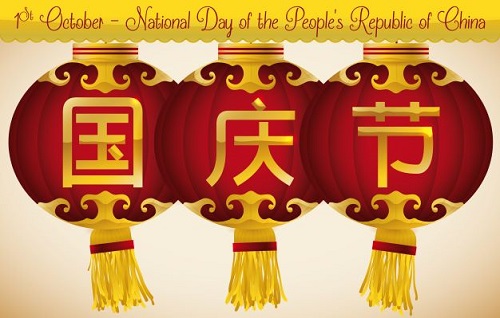 Today, 1st October 2019 marks the 70th anniversary of the National Day of the People's Republic of China.

The National Day of the People’s Republic of China is celebrated on 1 October each year. 2019 is the 70th anniversary.

In 1949, a long-standing civil war between two political parties in China resulted in the country being split into two states.

The PRC leaders and 300,000 Chinese celebrated the creation of the new government in Tian'anmen Square and it subsequently became the National Day.

The 7-day holiday from 1–7 October is called 'Golden Week', as it is the biggest week for tourism in China, when people have a week off to reunite with families and take trips. Last year, over 700 million trips were made by Chinese travellers. Travel and tourism revenue during the holiday reached $87 billion, and retail and catering revenue exceeded $200 billion. Sanya, Beijing and Xiamen were the top three destinations over the holiday.

Read our Chinese Cultural Newsletter for a snapshot of Chinese business culture.

To find out how you can work more effectively with your Chinese colleagues, clients or suppliers please get in touch for sample course outlines for Chinese Mandarin or Cantonese language programmes or Chinese cross-cultural workshops.   All our courses are tailored to suit your needs and delivered at a location of your choice or online.