New cycle route opens to improve links with the city 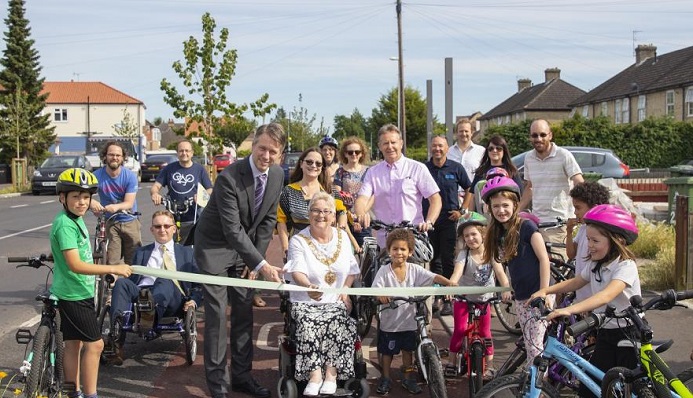 Cyclists will enjoy smoother and safer journeys following the opening of a new route along Green End Road to make it easier to cycle into the city.

It is one of five Cross City Cycling schemes funded and being delivered by the GCP to make it quicker, easier and safer for people to jump on to their bike to get around Cambridge.

Cllr Van de Weyer said: “The Links to Cambridge North Cross City Cycling scheme will help to make it safer and more appealing for to people to leave their car and get around on their bike.

“This is one of 18 major cycling projects and other improvements being delivered by the GCP as we expand and enhance Greater Cambridge’s first-class cycling network and look to cement our standing is Britain’s cycling city.”

Phase one of the Green End Road project was along the section from Chesterton High Street to Nuffield Road and the addition of advisory cycle lanes. A completely segregated cycle lane with priority over side roads – the first of its kind in Cambridge – has been delivered in phase two, from Nuffield Road to Milton Road.

A new zebra crossing has been added south of Nuffield Road to make it easier for pedestrians to get around and new trees and shrubs have been planted to put the green in to Green End Road.

The new route will link to the Milton Road scheme being proposed by the GCP to form a first-class, seamless route across the city.