The most recent data from Cambridge University’s Centre for Business Research shows the year-on-year growth of the more than 24,000 Cambridge-based companies(1) – for the period up to April 2017 – showed global turnover growth of 14.4% and global employment growth(2) of 9.2%. 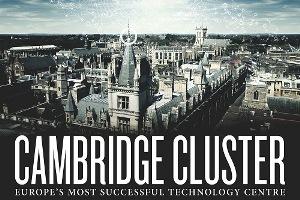 On both measures, growth accelerated from 10.8% and 7.2% respectively in the similar period to April 2016, despite the Brexit vote in June 2016.

Sectorally, the knowledge intensive sectors have continued to grow at a steady, high pace –16.2% in revenues, 5.1% in global employment – and these sectors now account for 32% of the sales and 27% of global employment of all Cambridge-based companies.

Employment at the non-corporate research institutions in the area has grown at a lower pace – 2.4%. However, more rapid growth has spread to the rest of the cluster: construction, utilities, property, finance, transport and car sales were particularly lively sectors, with sales growth ranging from 17% to 32% and employment growth of 12% or more in the year. Employment growth in the education sector was also high at 15%, but this primarily reflected transfers of employees from state schools to newly incorporated academies, rather than new employment.

Spatially, there is something of a similar story. There are clear signs of knowledge intensive companies “agglomerating” or “clustering” – i.e. tending to locate close to each other in certain areas: ICT companies have tended to cluster in the north of the city around the science parks, while life sciences companies, which having also grown in the north, are now showing additional growth in the south and south east of the city too.

On the other hand, the spread of other, non-knowledge intensive businesses further out from the city - into East Cambs and to the north and north-west - is also quite visible from trend maps of the sub-region. The current Cambridge Cluster Map, showing all Cambridge-based companies, can be viewed at www.camclustermap.com

A further sign of the cluster maturing is the growth of the larger companies in the sub-region. There are over 100 companies employing over 250 people in the area and, while small company turnover and employment growth continued to be high at around 27% and 19% respectively, the largest companies also grew briskly at 26% and 12%.

Commenting on the data, which is funded annually by Cambridge Ahead, Matthew Bullock, Vice-Chairman of Cambridge Ahead and Master of St Edmund’s College, Cambridge, said: “The acceleration in growth – albeit now over a year ago – was a surprise in these numbers, given companies’ concerns about Brexit, albeit the devaluation of sterling following the Brexit vote may have been a factor in this acceleration.

"It is interesting to see that growth spread through all sectors and outwards across the city region. This data lends power to the argument that we need to ensure that our infrastructure can cope with the challenges that the scale and pattern of this growth brings with it."

(1) Means companies, whose registered offices or primary trading addresses are located within 20 miles of Cambridge City centre; in 2016. The indigenous companies with 50 or more employees amongst these accounted for around 78% of corporate global turnover and 73% of corporate global employment of all Cambridge based companies with 50 or more employees. Other, national and international companies’ operations within the sub-region are excluded from these data, but are shown on the Cluster Map as Cambridge actives.

(2)Global turnover is worldwide sales revenue; global employment includes employment by these indigenous companies in their operations outside the sub-region. When reporting growth rates in global turnover and global employment, the rates take account of the effects of births/deaths and companies moving in/out of the area. Employment in the area by national and international companies, the public sector and partnerships/sole traders is excluded from these data.

Cambridge Ahead is a business and academic member group dedicated to the successful growth of Cambridge and its region in the long term. Our vision for Cambridge is to be the pre-eminent small city in the world. The group aims to represent the city’s business community and our partners who share its vision, by offering soundly-based opinion and be an advocate for Cambridge to local and national governments about the opportunities and needs of the region. We are politically non-aligned. Some of the largest and most influential organisations in the Cambridge region make up Cambridge Ahead’s membership, including Arm, AstraZeneca, Addenbrookes and Marshall of Cambridge. For more information visit www.cambridgeahead.co.uk

About the Centre for Business Research:

The Centre for Business Research (CBR) is a research institution within the University of Cambridge which conducts interdisciplinary research on enterprise, innovation and governance in contemporary market economies. Established in 1994, it is now one of the leading centres for social science research on economics, law and business in the UK, and has a growing European and global reputation. For more information, please visit www.cbr.cam.ac.uk

Posted by Cambridge Ahead

Cambridge Ahead is a business and academic member group dedicated to the successful growth of Cambridge and its region in the long term. We aim to represent the city’s business community by offering soundly-based opinion and advice to local and national governments about the opportunities and needs ...