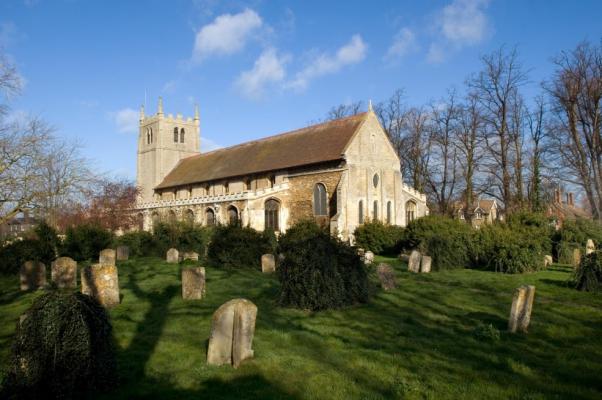 Two Grade I listed churches in the East of England have been re-listed  by the Department for Digital, Culture, Media and Sport (DCMS) on the advice of Historic England,  with new information linking them to the Second World War and the Allied victory in Japan.

A Second World War memorial commemorating the role of the Chindit Special Forces, who served in Burma, has also been granted protection to mark the 75th anniversary of VJ Day – Victory over a warring Japan on 15 August 1945. The Chindits Memorial in Victoria Embankment Gardens in London has been listed at Grade II by the Department for Digital, Culture, Media and Sport (DCMS) on the advice of Historic England.

DCMS has re-listed two Grade I listed churches in Cambridgeshire, with updated list entries that include new information linking these sites to the Second World War and the allied forces victory in Japan. The list description of St Thomas à Becket now includes mention of a Lady Chapel in the south aisle giving thanks for the safe return of Lord de Ramsey, a Second World War Prisoner of War in Japan, as well as a dedication and commemorative tablet added in 1956.

The Grade I Church of St Peter and Paul in Fenland has been re-listed to make special mention of a memorial to the men from the area who were killed in action or in captivity in the Far East.

Their list descriptions have been updated on the National Heritage List for England which affords special protection to the most important parts of England's heritage.

Heritage Minister Nigel Huddleston said:  "As we come together this weekend to mark 75 years since VJ Day, we must not forget the sacrifices of the Second World War generation. It is a fitting tribute to all who served in the Far East that we are protecting and preserving sites so that future generations can learn about this important period of our history."

Claudia Kenyatta, Director of Regions at Historic England said: “We are surrounded by surviving physical evidence of the Second World War, from former air raid shelters to statues and plaques, however memorials that commemorate the Allied forces fighting in the Far East are surprisingly rare in England. We are pleased that the memorial to the Chindit Special Forces in Burma has been listed. 75 years on, it’s important that we remember them.”

The Church of St Thomas à Becket, Ramsey (pictured) was built in the late 12th century as a guest house or infirmary for Ramsey Abbey and converted to a church in the early 13th century. Inside is a Lady Chapel giving thanks for the return of Lord De Ramsey from the Far East in 1945. The Chapel and accompanying memorial plaque were added in 1956, five years after the church was originally listed.

Lord De Ramsey fought in the Second World War as a captain in the Royal Artillery and was awarded the Territorial Decoration. He was taken a Prisoner of War by Japan along with over 190,000 British and Commonwealth troops, almost a quarter of whom died in captivity.

Conditions in Prisoner of War camps in the Far East varied but the treatment these captives received was often extremely harsh. Prisoners carried out forced labour and were subjected to sadistic punishments for minor breaches of camp rules. Poor living conditions and a meagre diet of rice and vegetables led to malnutrition and disease was rife in the camps.

Memorials to those killed in the Far East are rare, with 25 examples inside churches, but chapels devoted to giving thanks for those surviving are even rarer.

CHURCH OF ST PETER AND PAUL, WISBECH, CAMBRIDGESHIRE – RELISTING AT GRADE I

The Church of St Peter and Paul was constructed in the 12th century and substantially rebuilt in the 14th century. The alterations over time can clearly be seen in the fabric of the building. It was later restored in the 19th century by George Glover and William Smith and listed in 1951 at Grade I.

This church includes a memorial to those killed in action or in captivity in the Far East during the Second World War. The memorial is a slate tablet set into a sculpted frame depicting a bamboo and coconut leaf hut. Whilst war memorials are common within parish churches, those specifically dedicated to the fallen in the Far East are rare. Most are a plain plaque, making the memorial in the Church of St Peter and St Paul stand out for its decoration.

This war memorial serves as permanent testament to the Chindit Special Forces, who fought on the first and second expeditions into North Burma in 1943 and 1944 during the Second World War. After years of Allied setbacks, the Chindits helped to turn the tide of the war against Japan in the Far East.

Named after Chinthe, a mythical beast which stands guard outside Burmese temples, the Chindit Special Forces came from the armed forces of the United Kingdom, Burma, Hong Kong, India, Nepal, West Africa and the United States of America. They were formed by Major General Orde Charles Wingate, DSO, 1903 – 1944, a British army officer born in India to a military family. They engaged the Japanese behind enemy lines in Burma and were trained to navigate through extremely difficult jungle terrain. Major General Wingate was killed on active service in Burma in March 1944 and the Chindits were disbanded in February 1945.

The Chindits Memorial takes the form of an ornate bronze statue of a Chinthe supported on a tall Portland stone plinth. The striking design has fine lettering and high-quality craftsmanship. On the front plinth is the blue enamel crest of the Chindits Association, as well as a portrait of Wingate and inscriptions explaining the role of the Chindits in the Second World War.

It was designed by architect David Price, with the sculpture of the Chinthe designed by Frank Forster, and was unveiled on 16 October 1990 by HRH Duke of Edinburgh. There is a separate further memorial to the Chindits in the National Memorial Arboretum in Staffordshire.

To mark VJ Day on Saturday 15 August a military delegation will lay a wreath at the Chindits Memorial. This is part of a series of commemorations happening across Whitehall, honouring the men who served in the Far East in during the Second World War.