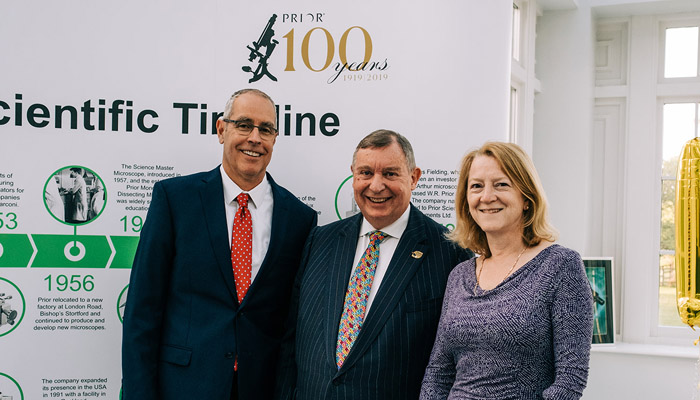 The evening started with entertainment by the Rose Quartet, a four piece string quartet based in Cambridge who played from their diverse and exciting musical repertoire.

Later in the evening Tom Freda, the President and CEO, gave a speech to the guests about the company and how “he has been proud to be part of a company that has a history as great as Prior Scientific’s”. This was followed by a speech by former employee Ray Franklin who worked for Prior some 47 years before his retirement in 2008. The speaking portion of the evening concluded with Stuart Jarvis, the CTO, describing how employees had created a limited edition souvenir goblet to commemorate the occasion. The souvenir showcases Prior’s design and manufacturing capabilities, coupled with that of local glass blower Steward Hearn from Chatteris. One hundred and fifty of these souvenirs have been made and will be presented to members of staff, suppliers, former employees and customers those who attended the 100 years’ celebration.

Claire Ruskin, CEO of the Cambridge Network, said “it was a great party and you can all be very proud of the terrific achievement”.

A cake created by Thorton’s Delights was cut by all six directors, Miles, Fintan and James Fielding owners of Prior Scientific. Their late father, Douglas (Dion) Fielding had been an investor in the McArthur microscope and purchased W.R. Prior and Co. in 1978. Alongside the Fieldings were Tom Freda, CEO, Stuart Jarvis, CTO and Simon Smith, CFO.

Prior Scientific now looks forward to the future and an exciting time ahead with the introduction of new products and the move of its nanopositioning brand, Queensgate, to new premises in Paignton, Devon.

Prior Scientific is a global leader in the design and manufacture of precision positioning devices, optical systems, automation solutions, and components