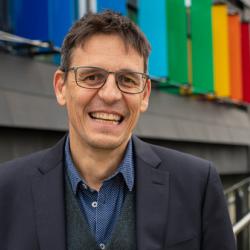 Professor Didier Queloz  jointly wins the 2019 Physics Nobel for his work on the first confirmation of an exoplanet – a planet that orbits a star other than our Sun.  Queloz becomes the 109th affiliate of the University of Cambridge to be awarded a Nobel Prize.

Professor Didier Queloz from the University of Cambridge has been jointly awarded the 2019 Nobel Prize in Physics along with Professor James Peebles and Professor Michel Mayor for their pioneering advances in physical cosmology, and the discovery of an exoplanet orbiting a solar-type star.

Queloz is Professor of Physics at the University’s Cavendish Laboratory, and Fellow of Trinity College, Cambridge. He leads the Cambridge Exoplanet Research Centre. In 1995, along with Michel Mayor, Queloz made the first discovery of a planet outside our solar system, an exoplanet, orbiting the star 51 Pegasi.

Queloz becomes the 109th affiliate of the University of Cambridge to be awarded a Nobel Prize.

The Royal Swedish Academy of Sciences announced the 2019 Prize this week.

The Nobel Assembly said: “The discovery by 2019 Nobel Prize laureates Michel Mayor and Didier Queloz started a revolution in astronomy and over 4,000 exoplanets have since been found in the Milky Way. Strange new worlds are still being discovered, with an incredible wealth of sizes, forms and orbits.”

"This year’s Laureates have transformed our ideas about the cosmos. While James Peebles’ theoretical discoveries contributed to our understanding of how the universe evolved after the Big Bang, Michel Mayor and Didier Queloz explored our cosmic neighbourhoods on the hunt for unknown planets. Their discoveries have forever changed our conceptions of the world."

"It’s an incredible honour and I’m still trying to digest it," said Queloz on the day he was awarded the Nobel. "When we discovered the first exoplanet, it was pretty obvious that this was something important, even though not everyone believed us at the time. Back then, exoplanet research was a very small field. I think there were about fifty of us and we were seen as weirdos. Now there are probably over a thousand people working in the field.

"It’s a hot topic at the moment, so I’m really happy that the field of exoplanets has been recognised with a Nobel Prize," Queloz said. "When you are working so passionately at your research, it can be very disruptive to your family. My family has always been there for me and I’m grateful of their support. This Nobel Prize is also an acknowledgement of their incredible patience!"

Today, many regard the discovery of 51 Pegasi b by Queloz and Mayor at the University of Geneva in 1995, as a moment in astronomy that forever changed the way we understand the universe and our place within it.

It was the first confirmation of an exoplanet – a planet that orbits a star other than our Sun. Until then, although astronomers had speculated as to the existence of these distant worlds, no planet other than those in our own solar system had ever been found.

Watch a video, listen to Professor Queloz at a press conference and read the full story