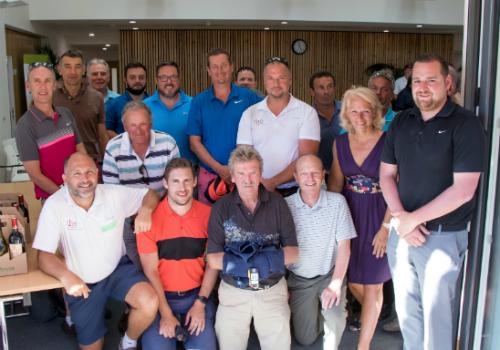 The Arthur Rank Hospice Charity Golf Day sponsored by AD Bly, raised over £7500 on Tuesday 26 June. The Gog Magog Golf Club kindly gifted the use of the 18 hole ‘Old Course’ to support Stephen Kay – one of the Charity’s Trustees and a club member – and help raise the greatest possible amount for the Charity.

The day kicked off at 8.30am with bacon rolls and coffee in the beautiful sunshine, followed by a shotgun start which allowed the majority of the 21 teams to enjoy and get to set off together on the 18 hole ‘Old Course’, as temperatures soared to 29 degrees C!

Throughout the day, the teams were able to keep a close eye on their competition thanks to ‘Competition Golf’, whose scoring technology (http://scoreboard.competitiongolf.com) enabled the leader-board to stay up to date after each hole. As each team reached their 16th hole, the leader-board was suspended: allowing Stephen Kay to announce the eventual winners at a presentation, after a BBQ hosted at the Arthur Rank Hospice.

In a change to the previous programme players were welcomed to the Hospice’s Bistro for a BBQ and refreshments, where further funds were raised through a charity raffle made possible thanks to prizes generously donated by the Golf Pro at Gog Magog Golf Course, Quy Mill Hotel & Spa, Mr and Mrs Mitcham, Thomson Corfield and Webb, Ashtons Legal and Barnes Construction.

Lynn Morgan, CEO for the Arthur Rank Hospice, thanked all those who had taken part: “It has been a pleasure to welcome you all back to the Hospice, to celebrate the winners of today’s golf day. We are so grateful to everyone who has supported the day and played an important part in raising more than £7500 today. Each year we have to secure over £8 million in order to provide our care and services free of charge, of which £4 million is raised through our community and special events like these.”

Mike Pringle, Director of AD Bly said “AD Bly Construction Limited were delighted to be the event partner for the Arthur Rank Hospice Charity Golf Day and to be associated with this fantastic charity. It was great to see so many people enjoying the golf and hospitality of the hospice, and to raise such a fantastic amount of money from the local community.”

Arthur Rank Hospice Charity would like to extend its grateful appreciation to: Stephen Kay for organising this traditionally bi-annual event; the players and teams who took part; the businesses who sponsored or supported the event; the team at the Gog Magog Golf Club for looking after the players so well; and Arthur Rank Hospice volunteers Sheila, Ian and Mike who helped at the course and throughout the day.