Scientists who study the nanoscale – with molecules and materials 10,000 times smaller than a pinhead – need to be able to test the way that some molecules twist, known as their chirality, because mirror image molecules with the same structure can have very different properties. For instance one kind of molecule smells of lemons when it twists in one direction, and oranges when twisted the other way.

The importance of chirality detection and sensing is highlighted by the most notable tragic example of the drug thalidomide, which caused abnormalities in developing foetuses in the late 1950's. Thalidomide was an equal mixture of left-and-right handed chiral molecules, yet each chirality causes drastically different effects, one is a sedative, the other a teratogen (i.e., a drug which can harm a foetus in the womb).

Detecting these twists is especially important in some high-value industries such as pharmaceuticals, perfumes, food additives and pesticides. Recently, a new class of nanoscale materials have been developed to help distinguish the chirality of molecules. These so-called ‘nanomaterials’ usually consist of tiny twisted metal wires, that are chiral themselves. 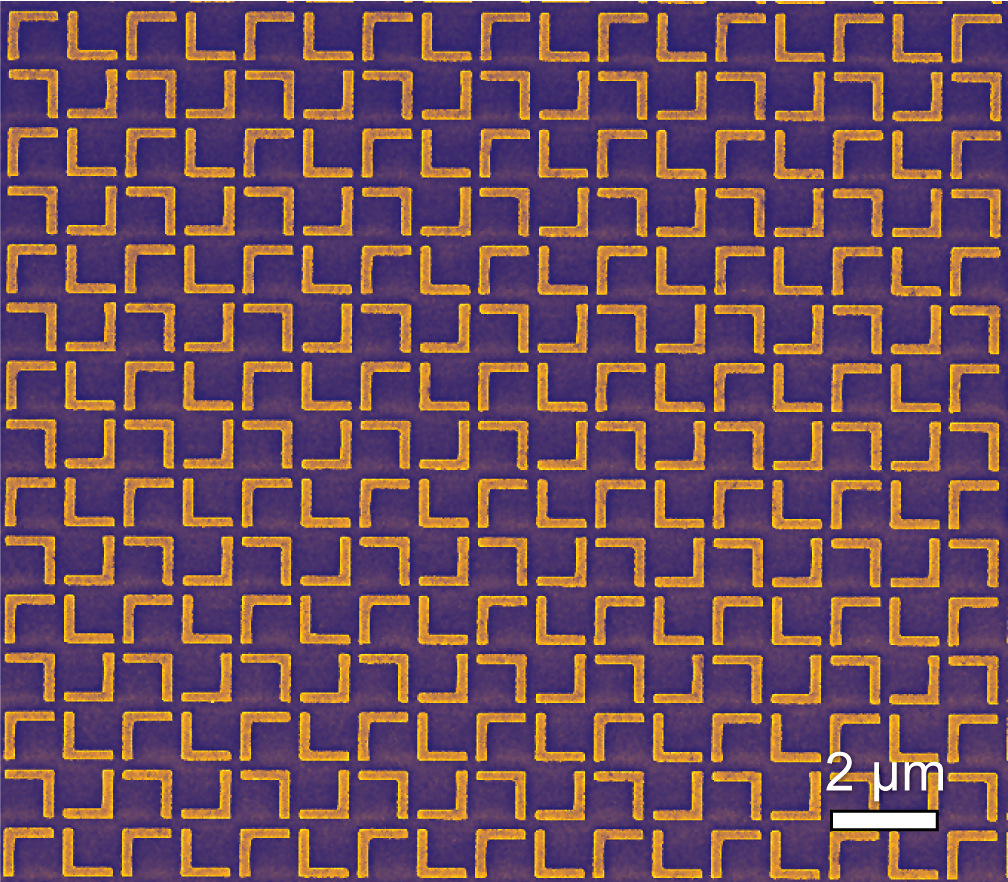 The image (right) shows a scanning electron micrograph of L-shaped chiral nanomaterial with equal amounts of left-and-right twists. For context, each L-shape is approximately 100x smaller than a typical human red blood cell.

However, it has become very hard to distinguish the twist of the nanomaterials from the twist of the molecules they are supposed to help study. To solve this problem the team from the University of Bath and University of Cambridge created a nanomaterial that is both twisted and it is not. This nanomaterial has equal number of opposite twists – meaning they cancel each other out. Usually, upon interacting with light, such material appears without any twist; how then could it be optimised to interact with molecules?

Using a mathematical analysis of the material’s symmetry properties, the team discovered a few special cases, which can bring the ‘hidden’ twist to light and allow very sensitive detection of chirality in molecules. Professor Ventsislav Valev, from the University of Bath, Department of Physics, said: “This work removes an important roadblock for the entire research field and paves the way to ultra-sensitive detection of chirality in molecules, using nanomaterials.”

Research associate Dr. Calum Williams, at the Department of Engineering, University of Cambridge, who fabricated the nanomaterials, said: “The ability to engineer nanostructured chiral materials – effectively ‘twisting’ the light on nanoscale – is opening up a new class of compact molecular sensor which can be read-out simply by shining a light on it”.

The study is published in the journal Nanoscale Horizons. The research was funded by the Royal Society, the Engineering and Physical Sciences Research Council, Cancer Research UK and the Science and Technology Facilities Council.

Image:  Shedding light on a nanomaterial that is both twisted and not at the same time.   Credit: Ventsislav Valev, Alex Murphy and Calum Williams