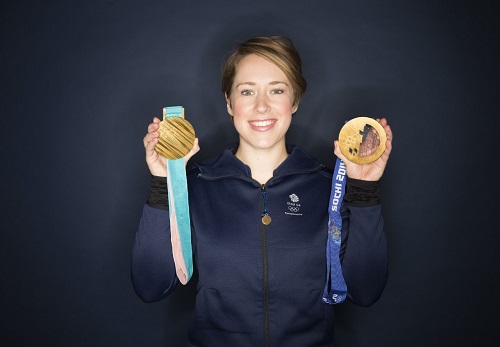 Lizzy Yarnold, the most successful British Winter Olympian of all time, will deliver the 11th Excellence in Sport Lecture on 8 March (7pm) as part of a series of free events at Anglia Ruskin University (ARU) to mark International Women’s Day.

Lizzy, who competed in the high-speed event of skeleton, followed up her gold medal at the Sochi Winter Olympics in 2014 with gold four years later in PyeongChang, making her the first British athlete to defend a Winter Olympic title.

Her online public talk will provide insight into competing at an elite level, as well as see Lizzy reflect on her journey as a female athlete and discuss the challenges she encountered during her career. She will also answer questions, which can be sent in advance via community@aru.ac.uk or be posted online on the night.

The Excellence in Sport Lecture Series is organised by ARU’s School of Psychology and Sport Science, whose Sport & Exercise Science courses are ranked number one in the country in the 2021 Guardian League Table. Previous speakers have included Graham Gooch, Goldie Sayers and John Barnes.

Lizzy, who retired from the sport in 2018, said: “I am delighted to be the 11th speaker in the Excellence in Sport Lecture Series at Anglia Ruskin University.

“Having been a student of Sport and Exercise Science myself [at the University of Gloucestershire] I’m excited to be able to speak directly to students, and the wider community, about my daily failures and successes which helped guide me along the way to two Winter Olympic gold medals.

“I am often asked ‘How did you get into such a strange sport?’ As a child with huge sporting ambitions, and what my parents would consider to be a fierce sense of independence and grit, it was probably inevitable.

“With only one year to go until the next Winter Olympics in Beijing, I hope to give a rare insight into the athletes’ experience, and their expectations, of preparing for a Winter Olympic Games.”

Dr James Johnstone, Associate Professor in Sport Science at Anglia Ruskin University, said: “The Excellence in Sport Lecture Series goes from strength to strength, attracting some extraordinary speakers from the world of sport. To hear Lizzy share her experiences of Olympic sporting situations that we can only dream of being in, promises to be an amazing evening.”

The free event on 8 March (7pm) is supported by Living Sport. To reserve a place, please visit the events pages on ARU’s website

In addition to Lizzy’s talk, other online events organised by ARU to support International Women’s Day include: