The touchscreen technology used in billions of smartphones and tablets could also be used as a powerful sensor, without the need for any modifications. 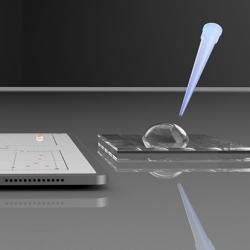 Researchers from the University of Cambridge have demonstrated how a typical touchscreen could be used to identify common ionic contaminants in soil or drinking water by dropping liquid samples on the screen, the first time this has been achieved. The sensitivity of the touchscreen sensor is comparable to typical lab-based equipment, which would make it useful in low-resource settings.

The researchers say their proof of concept could one day be expanded for a wide range of sensing applications, including for biosensing or medical diagnostics, right from the phone in your pocket. The results are reported in the journal Sensors and Actuators B.

Touchscreen technology is ubiquitous in our everyday lives: the screen on a typical smartphone is covered in a grid of electrodes, and when a finger disrupts the local electric field of these electrodes, the phone interprets the signal.

Other teams have used the computational power of a smartphone for sensing applications, but these have relied on the camera or peripheral devices, or have required significant changes to be made to the screen.

“We wanted to know if we could interact with the technology in a different way, without having to fundamentally change the screen,” said Dr Ronan Daly from Cambridge’s Institute of Manufacturing, who co-led the research. “Instead of interpreting a signal from your finger, what if we could get a touchscreen to read electrolytes, since these ions also interact with the electric fields?”

The researchers started with computer simulations, and then validated their simulations using a stripped down, standalone touchscreen, provided by two UK manufacturers, similar to those used in phones and tablets.

The researchers pipetted different liquids onto the screen to measure a change in capacitance and recorded the measurements from each droplet using the standard touchscreen testing software. Ions in the fluids all interact with the screen's electric fields differently depending on the concentration of ions and their charge.

“Our simulations showed where the electric field interacts with the fluid droplet. In our experiments, we then found a linear trend for a range of electrolytes measured on the touchscreen,” said first author Sebastian Horstmann, a PhD candidate at IfM. “The sensor saturates at an anion concentration of around 500 micromolar, which can be correlated to the conductivity measured alongside. This detection window is ideal to sense ionic contamination in drinking water.”