Staff from regional accountancy firm, Price Bailey, joined forces earlier this month to cycle the equivalent of 361 miles to raise vital funds for Action Medical Research, without travelling an inch. 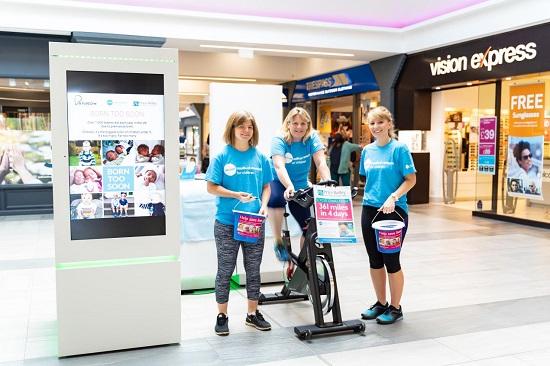 The 361-mile target was equal to the distance between all their local offices from Norwich to Guernsey. Over 30 individuals from across the accountancy practice in Bishops Stortford, Cambridge and Norwich set up their static bikes, which were kindly donated by local gyms, in town centre locations and began cycling, raising over £400 in the process.

The static bike challenge, which took place between the 3rd and 5th June was just the latest effort in a two-year fundraising campaign for Action Medical Research, which to date has raised a staggering £55,000. This challenge was specifically in support of their ‘Saving Tiny Lives’ campaign; a campaign which focuses on generating funds to carry out vital research into reducing premature births. According to Action Medical Research, around 60,000 babies are born prematurely in the UK, and sadly 1,000 tragically die making it the most significant cause of death in babies; for those that do survive, it’s also the leading cause of disability.

James King, Corporate Social Responsibility Partner at Price Bailey, said: “We are grateful to the team for all of the effort they put in with this challenge and we are very thankful for the generosity and great response from the general public.  The research that we help Action to fund for their ‘Saving Tiny Lives’ campaign is valuable in improving the futures of premature babies and is a very worthy cause.”