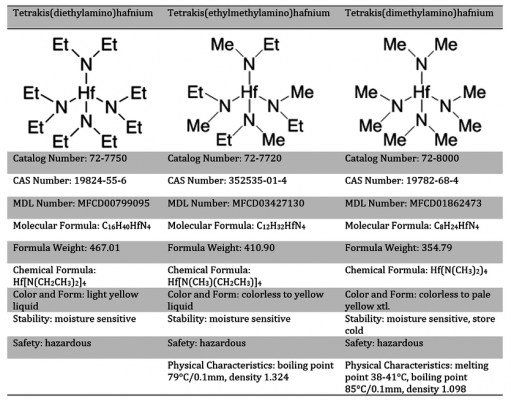 In recent years, hafnium oxide (as well as doped and oxygen-deficient hafnium oxide) has attracted additional interest as a possible candidate for resistive-switching memories (ReRAM) and CMOS-compatible ferroelectric field effect transistors and memory chips. A great example is Dresden based NaMLab and The Ferroelectric Memory Company (FMC) who are integrating HfO2 based ferroelectric transistor (FeFET) memory. The FeFET is a long-term contender for an ultra-fast, low-power, and non-volatile memory technology. In these devices, the information is stored as a polarization state of the gate dielectric and can be read non-destructively as a shift of the threshold voltage. The advantage of a FeFET memory compared to the Flash memory is its faster access times and much lower power consumption at high data rates.

When grown using chemical vapor deposition (CVD) from β-diketonate precursors, alkoxide precursors, and chloride precursors, a relatively high (typically greater than 300 °C) deposition temperature is required, which results in rough films because of their high crystallinities. ALD based HfO2 films employing both chloride and iodide precursors are feasible as low as 180 °C, but then typically exhibit high incorporation of chlorine and iodine impurities. As for the CVD processes mentioned above, the high temperatures needed to prevent this contamination result in the formation of highly crystalline films with apparent surface roughness. Etching of the growing oxide surface by the precursors themselves also causes additional surface roughening and non-conformality. The etching might also explain the difficulty in depositing a conformal coating on high-aspect-ratio structures using these halide precursors.

To address these concerns, Professor Roy G. Gordon and members of his laboratory at Harvard, in the late 1990s and early 2000s, invented metal alkylamide precursors to create thin films of high-k dielectric materials (e.g., HfO2, ZrO2). They also filed patents for their innovation at the US Patent Office in 2000.

The metal alkylamide precursors (e.g., TEMAHf) produce less corrosive by by products compared with halide precursors (e.g., HfCl4). The by products themselves neither etch the adsorbates nor cause additional surface roughness, which in turn affords good conformal coating on high aspect ratio structures. As a liquid precursor, they can be easily vaporized, unlike solid HfCl4, yielding significant growth-per-cycle (GPC) due to high transport efficiency. There is no chlorine contamination in the deposited HfO2 film, which leads to reduced interface charges, improved dielectric properties, and suppressed leakage current. Metal alkylamides also exhibit higher reactivity, which enables lower deposition temperature. In general terms, the hafnium alkylamide precursors are preferred for high aspect ratio applications like DRAM and 3D MIM Capacitors, while for planar logic and FinFET devices hafnium chloride is typically used.

Please find here one of the well-cited publications on ALD of HfO2 from Prof. Gordon’s Harvard laboratory. This article from 2002 takes advantage of the above three Hf alkylamides and water in deep trench DRAM structures (from Infineon) to study the properties of the deposited oxide films by Hausman et al.

*This blog had been researched, produced and written by Jonas Sundqvist.  It is reposted from BALD Engineering's blog on July 28, 2019.  Original blog: http://www.blog.baldengineering.com/search/label/ALD%20-%20Atomic%20Layer%20Deposition

Products mentioned in this blog and related products: