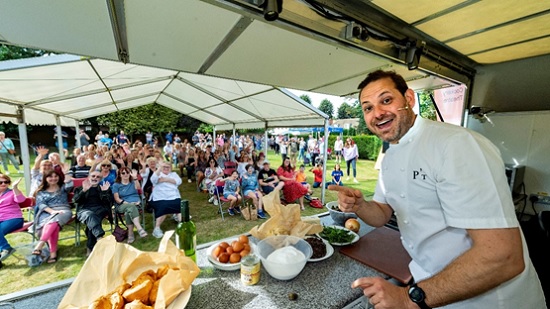 The Newmarket Food and Drink Festival has been hailed a success by organisers after thousands of visitors flocked to the grounds of the historic Jockey Club Rooms in central Newmarket last weekend.

Over 10,000 visited the two-day festival to sample some of the best food and drink from regional producers and learn new cooking tips from celebrity and top regional chefs. The organisers of the Festival consider the numbers to be a great achievement given the past 18 months.

Visitors enjoyed the finest cuisine and drink, from freshly prepared street food and independent bars to artisan grocery products and breweries, with over 50 producers showcasing their wares. There was also live entertainment with performances from a host of local bands and musicians including The Hooligans and Flaming June.

Key highlights of the event were undoubtedly the live Cookery Theatre, which was supported by Corney & Barrow – one of the oldest independent wine merchants in the UK. Celebrity chefs, alongside some of the region’s top chefs, took to the main stage to showcase their favourite dishes with BBC Radio Cambridgeshire presenter Chris Mann compering and The Wine Tipster, Neil Phillips, offering his expert advice on wine pairings for each dish prepared on stage.

The celebrity chef line-up included Festival favourite Rosemary Shrager and Tristan Welch, both of whom have very recently appeared on TV in ITV’s Cooking with the Stars. They ended up joining forces on stage, resulting in an impromptu comedic double act that delighted the audience as they prepared their various dishes, including Tristan’s outrageously decadent chocolate pudding.

Chefs from some of the top restaurants in the region, including Midsummer House and the Packhorse, also demonstrated their favourite dishes.

Among the happy stallholders – many of whom sold out after day one of the Festival and had to make urgent trips to restock – were some of the East of England’s top artisan producers and award-winners, including Hadley’s Ice Cream; Harrison Chocolatiers; Three Counties Field Kitchen; LillyPuds Ltd, who specialise in Christmas puddings, plum Puddings, sticky puddings and more; and vegan and organic afro-Caribbean food from Mama’s Kitchen, among many more. A full list of exhibitors can be viewed via the Festival website.

The live music stage hosted a sterling line-up of performers including The Hooligans, who specialise in traditional Irish music – there were many a foot tapping and even dancing from the younger members of the audience during their performances. The equally energetic and folky Flaming June, a FATEA Award winner with a new album due out shortly, also proved to be very popular amongst the audience, as did Three Years Younger, Serena Grant, Kyle Toolan, David Brown, Cameron Baker, and Study of Us.

Noel Byrne, Chair of the Newmarket Food and Drink Festival, said: “It’s been absolutely fantastic to see so many people back with us within the historic grounds of the Jockey Club Rooms, enjoying the very best food and drink.

“We’ve had a wonderful two days getting our exhibitors, visitors and volunteers back together after two years. People have had a chance to see, meet and buy from many of the best food and drink producers in the East of England. Not to mention the opportunity to pick up cooking tips from some of the best chefs in the region, alongside the inimitable Rosemary Shrager who had the audience in stitches during her impromptu double act with Tristan Welch.

"Newmarket Food and Drink Festival has always been a fantastic festival, but this year more so than ever. And, of course, we were delighted to continue our support of the Henry Cecil Open Weekend, which kicks off this weekend, by raising money for their local charities.”

Sponsors for the event include Newmarket BID – Love Newmarket, Corney & Barrow, and G’s Fresh. For more information about the Festival, visit here. The Newmarket Food and Drink Festival is supported by the Henry Cecil Open Weekend, which takes place this coming weekend  (18 and 19 September) in and around Newmarket.