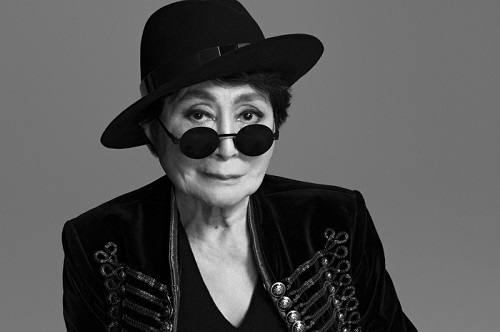 Legendary artist Yoko Ono will be taking over Anglia Ruskin University (ARU) next month, with an exhibition, performance, symposium and film screening staged on the Cambridge campus.

Conceived and curated by Gabriella Daris, YOKO ONO: LOOKING FOR… is a 10-month, multi-site exhibition showcasing Yoko Ono’s work in Cambridge for the first time.

YOKO ONO: LOOKING FOR… (ARISING, MEND PIECE, CUT PIECE) will run from 3 October-1 November at ARU’s Ruskin Gallery. Daris explains it will explore “themes of violence and healing that have preoccupied Yoko Ono since her displacement from Tokyo during World War II”.

Yoko Ono has issued an open call for women to send in a testament of harm inflicted upon them for simply being a woman. These submitted testimonials, accompanied by a photograph of each woman’s eyes, will feature in the powerful art installation ARISING, staged in ARU’s Ruskin Gallery.

MEND PIECE invites visitors to ‘mend’ broken pieces of porcelain – a counterpoint to the harm highlighted in ARISING – while CUT PIECE is a special performance taking place on Thursday, 3 October (6pm) and is free to attend.

First performed by Yoko Ono in 1964, CUT PIECE will see the performer, Fukiko Takase, kneel with a pair of scissors in front of her as members of the audience will be invited to cut a portion of her clothing off and take it away with them.

Prior to CUT PIECE on 3 October there will be a one-day symposium bringing together scholars from the fields of art history, art theory, film studies and philosophy in order to explore the many facets of Yoko Ono’s work to date. Convened by Gabriella Daris, the free symposium is open to the public and will be held jointly at the Howard Theatre, Downing College, and at ARU.

The final event at ARU will be a screening of RAPE, a film directed by Yoko Ono and John Lennon. Shot mainly in close-up with a handheld camera, the 1969 film generates some of the fear provoked by the press that surrounded Ono and Lennon during the height of their fame.

The screening, which is part of Cambridge Festival of Ideas, will take place at the Mumford Theatre on 22 October (6pm), and will be followed by a panel discussion.

Chris Owen, who is taking part in the panel discussion and is co-ordinating the Yoko Ono exhibition at ARU, said: “The majority of the work in this exhibition dates back to the 1960s, but in an era of Time’s Up and Me Too, unfortunately the art on display seems even more relevant now than it did 50 years ago.

“Yoko Ono’s work challenges people to think about both art and wider issues, and we’re hoping as many people as possible will be able to visit ARU during October to see her incredible work and that many will also take part in the ARISNG and CUT PIECE works themselves.”

For further information about Yoko Ono’s various events at ARU, including details of how to submit a testimonial for ARISING, please visit: https://www.artrabbit.com/events/yoko-ono-looking-for-arising-mend-piece-cut-piece