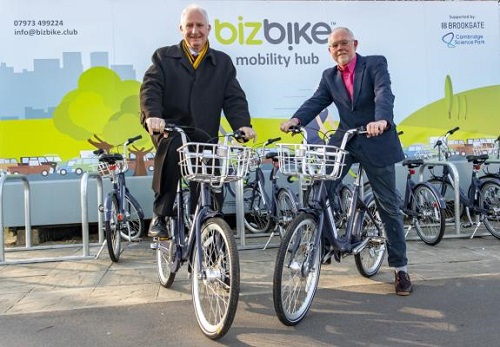 The lockdown has shown us what a traffic and pollution-free environment could look and feel like. It has given us a glimpse of the improved world Greta Thunberg, Extinction Rebellion and others were advocating long before the crisis. Let’s now all work together creatively and positively to turn the Covid disaster into a pivotal opportunity to build a healthy future for our city, our children and grandchildren.

The danger is that once the lockdown is lifted there will be a dramatic increase in single-passenger car use as we all return to work avoiding public transport due to concerns about social distancing. And some negative trends have already emerged from the crisis. Public transport usage has fallen dramatically. At the Cambridge Biomedical Campus, NHS staff have been given free parking which has encouraged car use. On the positive side, a recent AA-Populus poll of nearly 20,000 drivers asking them what their post-Covid transport plans were revealed that:

We need to take control of these transition options and use them as an opportunity to build a better future. Let’s look at what other cities are planning.

In Milan, one of Europe’s most polluted cities and hardest hit by the coronavirus pandemic, 22 miles of city streets will be made more accessible to pedestrians and cyclists in the coming months, as the city begins a major project to transform roads in the city centre. The ambitious Strade Aperte (Open Streets) plan aims to reallocate street space from cars to pedestrians and cyclists, making it safer and easier for people to leave their vehicles at home once lockdown is lifted. Milan transport authorities say metro services in the city will run at 30% capacity in order to allow social distancing. So instead of transporting the usual 1.4 million passengers per day, the Milan metro will only be able to carry 400,000 people daily. Anticipating a resultant spike in car traffic, the city is looking at a range of options to encourage two-wheeled transport.

In Paris, Mayor Anne Hidalgo is pursuing a pre-Covid “100% cyclable streets” programme to be achieved by 2024.

In Padova, Italy, the creation of a delivery consolidation and co-ordination service (also pre-Covid) has led to the reduction of 1,216 km per day of inner-city deliveries.

In Colombia, Bogotá is pursuing a creative alternative to trains and buses. Mayor Claudia Lopez announced that the city’s open streets day route, the world-famous Ciclovía, normally held only on Sundays, will be closed to cars and opened to cyclists and pedestrians during weekdays too. More than 76 kilometres (47 miles) of street closures will now take effect each weekday to give people alternatives to commuting through the public transit system. The temporary new cycling routes add to the city’s 500 kilometres (310 miles) of permanent bike lanes.

New Zealand is funding "pop-up" solutions, or tactical urbanism projects, as part of government policy to improve cyclist and pedestrian safety amid in response to the pandemic. Transportation Minister Julie Anne Genter has called on cities to apply for 90% funding to create more space for pedestrians and cyclists with wider sidewalks and temporary bike lanes.

Closer to home in the UK, Brighton has made part of its seafront Madeira Drive open only to pedestrians and cyclists from 8am to 8pm. Prior to the lockdown, Birmingham published a transport plan that will limit access for private cars access and ban through-trips. Commercial vehicles will still be permitted to enter the city centre but restrictions will apply. Walking and cycling will be given priority in the city centre. Scotland has set up a £10 million ‘Spaces for People’ fund for temporary infrastructure for active travel – giving local authorities 100% funding to set up temporary schemes such as widened pavements and pop-up cycle lanes.

Let’s focus on a set of realistic achievable measures that we can plan NOW in Greater Cambridge for rapid implementation post-lockdown.

This is just my “Top 10” list of ideas for discussion. A key lesson from the Covid crisis is that we should not leave planning of our futures to our politicians, their advisors and bureaucrats. Constant monitoring, debating and strategizing is needed to provide creative, future-proof planning at local, regional, national and international levels. We should start in Cambridge by forming a public-private sector Transport Task Force which includes representatives from all levels of local government, transport operators, advocacy groups like CamCycle, Smarter Cambridge Transport, Cambridge Climate Emergency, Carbon Neutral Cambridge, Extinction Rebellion and others, private sector bodies like Cambridge Ahead, Cambridge Network, Chambers of Commerce and BID, the universities, and youth groups like Cambridge Schools Eco Council. CamCycle’s current Spaces to Breathe campaign will have generated valuable ideas that can feed into this process. And the transport recommendations of last year’s Citizens’ Assembly should be a starting point so we can build on work already done. The city’s tech-savvy could form a civic hacker force to use the Polis consensus-building platform to create a vCambridge process along the lines of vTaiwan.

Of course other sectors and issues need similar input, but let’s make a start with transport.

This body could become a clearing house for open discussion, building consensus and prioritisation of ideas and projects, formulating a clear transport strategy that sets short-, medium- and long-term projects. Mega billion-pound prestige projects will have to be put on hold post-Covid and practical cost-effective measures given priority.

CET develops and manages a range of zero-emission transport solutions and services based on e-bikes and lightweight electric vehicles, piloting them initially in Cambridge for deployment across the world.