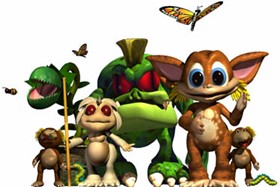 The classic CREATURES series of PC games – originally developed by Cambridge, UK based Creature Labs – has finally been OS updated, historic bugs fixed and on December 6th will be released on Steam.

Community management will be provided by Critter Consortium - a new indie label looking to make an impression on the world’s largest digital platform.  Despite 20 years having passed since the last Creatures game release, the Creatures fan community still run a number of fansites and play creatures related game events.  CREATURES was reckoned to be more interesting upon its release than the discovery of life on Mars – the Creatures community clearly agree !!

Gameware Europe and Critter Consortium are proud to announce the upcoming release of the iconic "Creatures" series on Steam.

Seeking to model life itself via digital DNA, Creatures is a game all about raising and teaching virtual "Norns" - a friendly species, that with the player's help can  learn, communicate, breed, and (hopefully!) survive in a world full of danger.

The series has been recognised in a number of awards, such as two EMMA wins for Creatures and Creatures Adventures, as well as a BAFTA nomination for Creatures Playground.

With six major releases on PC between 1996 and 2001, the series has delighted fans with its unrivalled technology in the field of artificial life by modelling real, scientific principles –

“Call it a game if you like, but this is the most impressive example of artificial life I have seen”  - Richard Dawkins ( Oxford University Zoologist and author)

“I first saw this program in the same week that evidence was discovered of life on Mars. This is more exciting”  - Douglas Adams ( Author of Hitchhiker’s Guide to the Galaxy)

Creatures Docking Station and Creatures 3 are set to release on December 6th, while the other games will be released later that month as Creatures: The Albian Years (a compilation of Creatures & Creatures 2 with  their respective expansions) and Creatures Village (including both Creatures Adventures and Creatures Playground),

Gameware has been at the leading edge of interactive technology development and R&D for over 20 years, delivering numerous projects from design to completion across mobile, web, PC and TV platforms.

The Gameware production team was nominated for a BAFTA for their pioneering work in delivering all studio and online interactive technologies for the  #1 augmented  reality CBBC gameshow BAMZOOKi.

Gameware is the owner of the historic Intellectual Property in the classic computer games "Creatures" and "James Pond" and also a relatively new IP "Creebies".

Critter Consortium is a new indie label set up with the aim of bringing old, beloved franchises to Steam - starting with the Creatures series.