Hank: the dexterous robot with the human touch 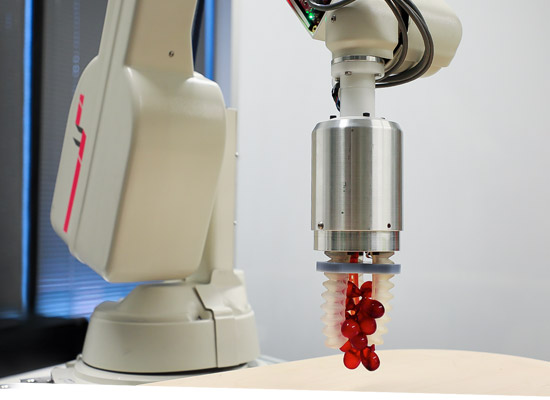 Hank is a pneumatic robotic gripper with a sophisticated sense of touch and slip. It can emulate the human ability to grip delicate objects using just the right amount of pressure.

Breakthrough innovation specialist Cambridge Consultants has developed Hank, a robot with flexible robotic fingers inspired by the human hand. Hank uses a pioneering sensory system embedded in its pneumatic fingers, providing a sophisticated sense of touch and slip, meaning it can emulate the human ability to hold and grip delicate objects using just the right amount of pressure. Hank could have valuable applications in agriculture and warehouse automation, where the ability to pick small, irregular and delicate items has been one of the industry’s “grand challenges”.

While warehouse automation has taken great strides over the last decade, today’s robots cannot emulate human dexterity at the point of picking diverse individual items from larger containers. E‑commerce giants are under pressure to deliver more quickly and at a cheaper price, but still require human operators for tasks that can be both difficult and tedious. By giving a robot additional human-like senses it can feel and orient its grip around an object, applying just enough force, while being able to adjust or abandon if the object slips.

Other robots with articulated arms used in warehouse automation tend to require complex grasping algorithms, costly sensing devices and vision sensors to accurately position the end effector (fingers) and grasp an object. Hank uses soft robotic fingers controlled by airflows that can flex the finger and apply force. The fingers are controlled individually in response to the touch sensors. This means that the end effector does not require millimeter-accurate positioning to grasp an object. Like human fingers, they close until they ‘feel’ the object. With the ability to locate an object, adjust overall system position and then to grasp that object, Hank can apply increased force if a slip is detected and generate instant awareness of a mishandled pick if the object is dropped. Hank moves a step beyond legacy approaches to this challenge, which tend to rely on pinchers and suction appendages to grasp items, limiting the number and type of objects they can realistically pick and pack.

Bruce Ackman, Logistics Commercial Lead, commented: “The logistics industry relies heavily on human labor to perform warehouse picking and packing and has to deal with issues of staff retention and shortages. Automation of this part of the logistics chain lags behind the large-scale automation seen elsewhere. Hank’s world-leading sensory system is a game changer for the logistics industry, making actions such as robotic bin picking and end-to-end automated order fulfilment possible. Adding a sense of touch and slip, generated by a single, low-cost sensor, means that Hank’s fingers could bring new efficiencies to giant distribution centers.”

Molded from silicone, Hank's fingers are hollow and its novel sensors are embedded during molding, with an air chamber running up the center. The finger surface is flexible, food safe and cleanable. As a low-cost consumable, the fingers can simply be replaced if they become damaged or worn.