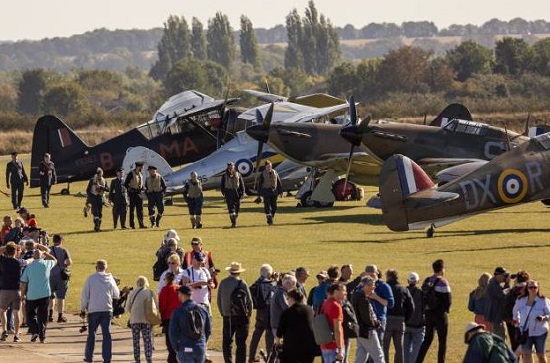 This summer, IWM Duxford will grant visitors access to newly transformed and previously unseen historic Second World War rooms to retell the story of the Battle of Britain in this 80th anniversary year.

Through the opening of The Ops Block: Battle of Britain and reinterpreted areas of the museum, the story of the first major military campaign fought primarily in the air will be explored alongside the historical figures who helped steer the course to victory.

Operating as a Sector Station during 1940, RAF Duxford provided support against the relentless assault of the German Luftwaffe during the Battle of Britain which saw intense fighting in the skies and attacks launched at airfields, towns and cities across the country. From 13 July, IWM Duxford will give visitors greater access to the historic site than ever before with the chance to step foot into the Second World War nerve centre of RAF Duxford and hear first-hand accounts of those who lived and worked here in the summer of 1940.

Display cases, listening points and a dedicated People Stories Room will tell of the historical significance of The Ops Block and introduce visitors to key ground and air personnel including leading fighter pilot Douglas Bader and members of the Women’s Auxiliary Air Force. An authentic recreation of the 1940s Operation Room will provide a multi-sensory immersion into the tension felt on 15 September 1940, the most action-filled day at RAF Duxford during the Battle of Britain. Items from IWM’s Second World War collection will be showcased, including new display items such as fighter ace George Unwin’s logbook detailing the victories he achieved on this pivotal day of fighting in September 1940.

IWM Duxford curator, Craig Murray, said “Teamwork was vital to winning the Battle of Britain and nowhere is this more apparent than in the Operations Room at RAF Duxford, the site of highly efficient communication between those on the ground and the pilots in the air. We want visitors to see and hear what it was like to work in such a highly pressurised environment on a day which saw the greatest activity in this phase of the Second World War. Through first-hand accounts, archival film footage and displayed personal items, we want this new visitor experience to highlight the role RAF Duxford played in protecting Britain from the threat of German invasion.”

IWM Duxford’s 80th anniversary commemorations will also see the re-opening of Battle of Britain Exhibition. This transformed area of the museum will feature interactive displays, highlighting Duxford-specific stories, including those of fighter pilot and flying ace 19 Squadron Leader Brian ‘Sandy’ Lane, and Bohumir Furst, a Czech Hurricane pilot who served with 310 Squadron.

The hangar will document the story of the Battle of Britain and allow visitors to get up close to iconic Second World War aircraft including a German Messerschmitt Bf 109, shot down during the battle before touring North America to raise funds for the British war effort. The exhibition will also explore Duxford’s shared history with the Supermarine Spitfire as the base of the first operational Spitfire squadron. An airworthy Supermarine Spitfire will be displayed in the hangar while a replica will complete the visitor experience between the hangar and newly opened Ops Block.

The Battle of Britain commemorative activities will culminate at IWM Duxford on 19 and 20 September with the annual Battle of Britain Air Show. Spitfires, Hurricanes and other iconic aircraft will take to the skies with dog fights and aerobatic displays. 1940s themed events and experiences on the ground will bring to life the sights and sounds of the era.

IWM Duxford is Britain’s best-preserved Second World War airfield, with a fascinating history that dates back to the First World War. Historic aircraft can regularly be seen taking to the skies from Duxford’s wartime airfield. Duxford has been a witness to world-changing events over the past 100 years where ordinary people have had extraordinary experiences.  Exploring state of the art exhibition halls and historic buildings, visitors walk in the footsteps of the men and women who served at RAF Duxford. Through the powerful stories of the men and women involved and the rich displays of aircraft we tell the story of the impact of aviation on the nature of war and on people’s lives.

Last entry an hour before closing.

A 10% discount will be offered for advanced tickets booked online.