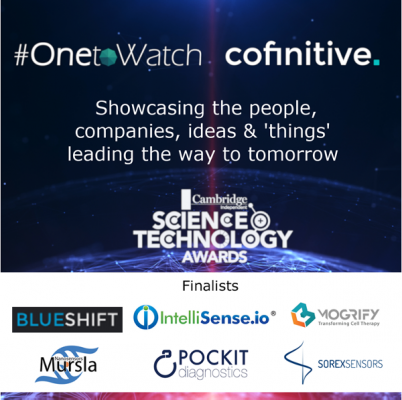 Cambridge Independent has announced the finalists in the Science and Technology Awards 2019 and cofinitive is delighted to be supporting the #SciTechAwards once again this year.

The 2018 awards introduced the cofinitive-sponsored The One to Watch category, which seeks to identify the people, companies and technologies that are setting the standards in innovation and entrepreneurship. This category formed part of our broader #OnetoWatch campaign as we sought to find the Top 21.

A special well done goes to those finalists that also made it all the way to being in our aware winning Top.21 – BIOS, Chiraz Ennaceur, Mursla, Satavia and Sorex Sensors.

In fact almost 40% of the #SciTech finalists were on our #OnetoWatch list. Impressive! So now let’s celebrate the finalists of the Cofinitive sponsored The One To Watch category:

Mogrify has developed a proprietary direct cellular conversion technology, which enables any mature human cell type to be transformed into any other, without going through a pluripotent stem cell- or progenitor cell-state.

A cancer liquid biopsy start-up aiming to detect up to 100 different types of cancer with a single blood test via its quantum biology diagnostics platform and device.

PockiT Diagnostics has created a biomarker panel that could be used in an ambulance to identify stroke subtype, enabling better care and saving lives.

A novel mass sensor which has distinct advantages over existing sensors including its mass sensitivity, extremely small size and incredibly low power requirement.

Good luck to all the finalists and we look forward to seeing you all at The Bradfield Centre for the Awards Ceremony on 30th October 2019.

And watch this space for the 2020 issue of our own #OnetoWatch campaign – there’s a few changes being made, but don’t worry, you can still apply to be included here.

Businesses all share the need to communicate effectively – and that’s where Cofinitive comes in. We are a corporate communications consultancy specialising in branding, strategy, marketing communications &amp; engagement. Cofinitive is not industry specific so clients come in all shapes and sizes, and vary greatly in the type of work they do.