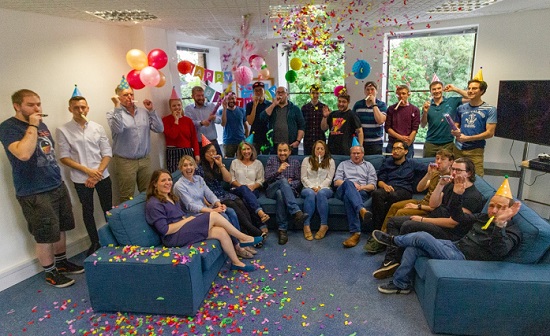 Enjoy smartphone centric content from your car dashboard on the commute? It’s likely VNC Automotive technology is embedded under the hood. And one year on from launching as an independent company, VNC Automotive has good reason to celebrate…

Tuesday 16th July 2019. Cambridge, UK – Approaching Hills Road from Station Road you pass a glistening parade of glass fronted fortresses, a who’s who of tech behemoths and start-ups that have set up hubs and homes in the city. In the slightly humbler surroundings of Betjeman House, you will find the VNC Automotive team, most likely some of the best embedded software engineering talent in the world who have led the frontier of in-vehicle connectivity. Today, as VNC Automotive celebrates its anniversary of independence, Tom Blackie, CEO takes stock and shares his highlights from year one.

“It’s been an amazing first year as an independent company, vehicle connectivity is higher than ever on the automotive agenda, primarily to enrich the in-vehicle experience for drivers and passengers but there are of course countless use cases. Having firmly established our credentials in this industry prior to spin-out, our expertise continues to be called upon by major OEM and Tier 1s, often resulting in industry first infotainment and entertainment projects.” Says Blackie.

“This year we took on 10 new customers, representing some of the most prestigious and innovative auto OEMs, Tier 1s and equipment suppliers, and completed around 20 new major projects, many of which are in production vehicles already. Our software is deployed within around 25 million and counting, with a lot of repeat business coming from existing customers as they move towards their next-gen in-vehicle infotainment concepts.”

“Clearly none of this would have been possible without a hugely capable and energised team. Since spin-out we’ve increased headcount by 84% and taken on additional office space to accommodate our new and future team members. What’s even more significant is that we haven’t lost a single person during the year – impressive given the typical staff attrition rate in high-tech businesses.  There is very healthy competition for engineering talent in Cambridge and we strive to make our career opportunities, our culture and work environment really compelling and it’s all going in the right direction, hence we must be doing something right!”

Blackie continues: “So, now we are preparing for an even busier, even brighter second year, but not before the team and I have had a good celebration today, as a massive thank you for their hard work, belief and commitment!”