100 years and counting with Mark Blayney

Head of Operations, Mark Blayney followed in his father's footsteps and began his career as an apprentice at Marshall in 1976. 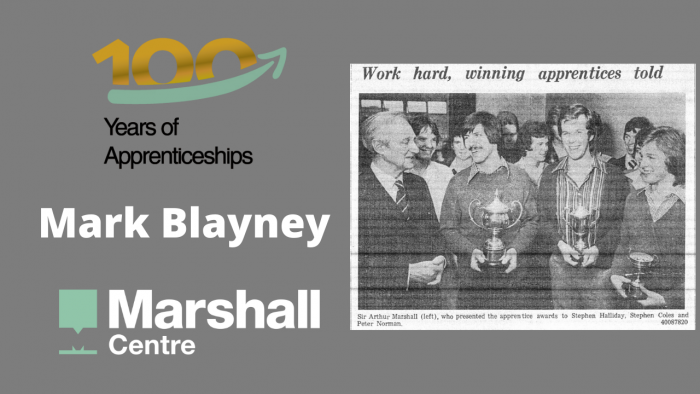 Marshall seems to run through the Blayney blood as Mark’s father worked at Marshall as a Sheet Metal Worker, which inspired Mark and his brother to apply for the apprenticeship programme. He completed his first year in our training centre where he learnt vital hand skills and theory from our industry-leading trainers, Keirron Mascall and Robin Lipscombe.

Mark said that entering the training centre as a 16-year-old was a real eye-opener. He admits to being a cheeky chap at times, but Robin quickly put him in his place, and he enjoyed every minute. Once he graduated from the training centre, he completed his rotations in every area of the business from fibreglass to the trim shop.

Throughout his working life, Mark worked in the prototype area and his manager's nickname was Curly. Mark said that he was an incredible man who taught him so much. He was strict with the apprentices, which helped to teach them discipline and Mark appreciated that. When Curly died, Mark went to the funeral and found out the Curly was Lord Mountbatten’s boson on the torpedo boats during the second world war.

Mark said, “I was fortunate to receive training from industry experts, who have helped me and moulded me into the person I am today!”

Mark remembered a few amusing stories from his time as an apprentice. There was a lad they worked with that always wanted what other people brought into work. One day, a colleague brought in some plant cuttings for someone to replant in their garden. The lad saw this and asked if he could have some plants as well. The others were getting annoyed at the lad, so they sent Mark into a field to pick a load of weeds and wrap them up in a newspaper. The lad came into work a few weeks later and asked what the plants were because he planted them in his garden, but they were growing at different rates. He was not best pleased to find out that he had populated his garden with weeds, but it taught him a lesson not to be so greedy in future.

Mark was fortunate enough to meet Sir Arthur Marshall and has many fond memories of the time they spent together. Sir Arthur used to ask Mark to show him what was happening in the workshop. Mark remembers that Sir Arthur walked so fast that Mark always had to run behind him to keep up. He said that Sir Authur was a lovely man and such a character! Mark also knew Sir Michael Marshall for a long time and used to show him around to keep him in the loop of what was happening in the business, and he recalled that Sir Michael had great sense of humour.

The key highlights of Mark’s career were winning three apprenticeship awards, being chosen by Sir Michael to be presented to the Queen and seeing his son, Shaun following the Blayney tradition and having a successful career at Marshall.

Mark still has the documents from the awards including the speech made by Sir Arthur Marshall when he presented the awards.

Mark is very proud of what he has achieved with the team at Marshall Land Systems where he continues to support the next generation of talent. He said that without exception, the people who come into the business through the Marshall Apprenticeship programme are the most skilled tradespeople he has ever worked with.

A huge thanks to Mark for sharing his apprenticeship journey with us! If you want to be part of Marshall Centre’s legacy, look at our apprenticeship opportunities here.