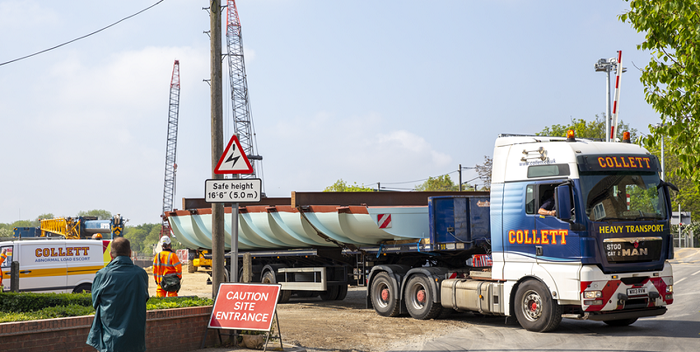 The Abbey Chesterton Bridge has arrived in Cambridge as construction continues on the Chisholm Trail project.

The Chisholm Trail project is funded and delivered by the Greater Cambridge Partnership and will create a new first-class walking and cycling route across the city.

The bridge, funded by Cambridgeshire County Council, has been transported to the site in Stourbridge Common in three sections on the back of wide-load lorries under a police escort. It will be lifted into place over the River Cam later in the summer.

Cllr Ian Bates, Cambridgeshire County Council’s Chair of the Economy and Environment Committee said: “This is an exciting step forward in the Chisholm Trail project with the Abbey Chesterton Bridge arriving in three separate sections which will then need putting together and lifting into place later in the summer.

"The bridge will provide pedestrians and cyclists with a safe and direct link across the River Cam, making it quicker and easier for people to travel around the city.”

Cllr Lewis Herbert, Cambridge City Council leader and Greater Cambridge Partnership board member, said: “The cross-city Chisholm Trail cycleway has been championed for over a decade by our cycling community and backed by Councillors – so the arrival of this bridge is a landmark moment in its delivery.

"It’s also a great example of the Greater Cambridge Partnership and Cambridgeshire County Council getting on jointly and safely with a critical project during this challenging time.

“The Chisholm Trail will unlock the east of the city by bike for many people – a new, safe and attractive way to discover the beauty of our city while getting swiftly to jobs, education and our railway stations, as well as opening up great extra  routes for leisure cycling. ”

Construction on the Chisholm Trail project is being carried out under government social distancing guidance.

The Chisholm Trail will enable people to walk or ride on a mostly off-road route connecting Cambridge North to Cambridge Station, making it easier and safer to access jobs, education and green spaces.