An apprentice's journey to team manager 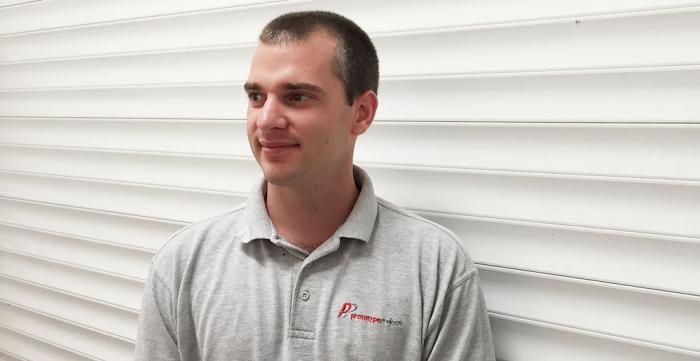 Prototype Projects has a long history of employing apprentices since it was established in 1980. Its General Manager, Gary Turner, was the firm's first ever apprentice at the age of 16 and he is still there over 40 years later, now passing on his knowledge to other colleagues and apprentices.

Having spent a brief period working as a general labourer on a building site, 23-year-old Ian Reinemann (pictured) was looking for a challenge that would help shape his future career. In 2011, he decided it was time to utilise and develop his maths and physics qualifications and so enrolled on an apprenticeship course with Huntingdon Regional College. Through college, Ian became our newest apprentice and was employed as an apprentice CNC Programmer/Operator.

Ian worked four days a week in our CNC (Computer Numerical Control) department and attended college once a week to balance his work/study programme. As part of his job, Ian was initially responsible for operating the manual mill and manual lathe. A year later, Ian progressed to working on the CNC machines under supervision. During his days in college, Ian focussed on the theory behind prototyping such as materials, tools and machining methods.

In September 2018, Ian commenced his Level 5 HND in Mechanical Engineering. This course would provide Ian with a greater depth of knowledge and, despite the months of lockdown during 2020, he successfully achieved the qualification in the summer of 2020.

Ian’s progression from his early days with Prototype Projects as an apprentice to where he is within the company now is vast and a real achievement for both Ian and us.

But it isn’t only the technical skills that Ian has gained and developed since those early days.

Working in an environment with highly skilled and experienced colleagues, Ian has learnt how to be a key member of both the CNC and the wider Prototype Projects teams. He has learnt the soft skills of dealing with people, of working as a team, of supporting others. Those are skills that can’t be taught in a classroom setting; they come with time and experience.

In 2018, an opportunity presented itself and Ian, having proved his ability over the years, was promoted to the role of CNC Manager and managed a small team of two. Fast forward to 2021 and Ian now manages a ten-strong, two-shift, team of operators and programmers of varying knowledge, skills and experience.

Through Ian’s hard work, and that of his team, we are now able to offer an Express service, like our 3D Printing Express service, so that our customers benefit from a fast turnaround on their CNC parts.

An important part of Ian’s role as the CNC Manager is to support and develop his team. He works with both those newly recruited and those who have been with the team for a few years teaching them how to program and run the machines. Who knows, maybe one day a member of his team will become the CNC Manager as Ian progresses further within the company. Perhaps it will be another apprentice to CNC manager success story.