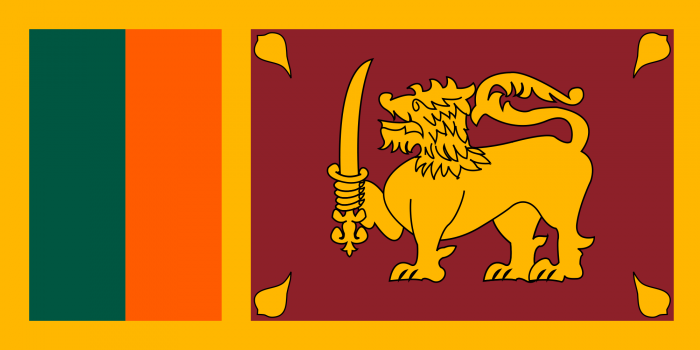 Each month Babel offers free briefings and expert advice for working with different cultures to its clients, learners and friends in the industry. This month the focus is on Sri Lanka.  Don't forget to enter the quiz for a prize!

In our last newsletter, we asked ‘What sort of jewelled Isle is Ireland often called?’ Congratulations to Nicholas Corn of F2F20 with the correct answer of ‘emerald’.  Your prize is on its way to you!

The island of Sri Lanka, formerly Ceylon, is an island country located in the Indian Ocean.  Its location as a major trading hub made it known to the Far East as well as Europe continent and the island was exposed to many cultural influences and settlers during its long and rich history.  In 1948, after nearly 150 years of British rule, Sri Lanka became an independent country.  In May 1972, it changed its name to the "Republic of Sri Lanka".

Colombo, which emerged as the main urban centre during British rule, remains the executive and judicial capital of Sri Lanka; Sri Jayewardenepura Kotte, is the legislative capital.

Sri Lanka is densely populated. Three ethnic groups - Sinhalese, Tamil, and Muslim - make up more than 99% of the country’s population, with the Sinhalese alone accounting for nearly three-quarters of the people. Among these principal ethnic groups, language and religion determine one’s identity. While the mother tongue of the Sinhalese is Sinhala, the Tamils speak the Dravidian language of Tamil and English is widely spoken in the commercial world.  More than 90% of the Sinhalese are Buddhists, but Sri Lankan and Indian Tamils are overwhelmingly Hindu. The Muslims usually speak Tamil. Christianity draws its followers (about 7% of the population) from among the Sinhalese, Tamil, and Burgher communities.

When meeting someone for the first time making a good impression is important. Talking about one’s family is welcome, as is where you are from and if you have travelled.  Show interest in the many religious festivals that take place throughout the year.  Every culture likes to share information about food, local delicacies and ingredients such as string hoppers, chili, coconut, tea, curd, etc.  Politics and the civil war are best avoided.  In May 2009, after 26 years of bloody conflict, the Sri Lankan army defeated Tamil Tiger rebels. The war divided Sri Lanka along ethnic lines - pitting the majority Buddhist Sinhalese-dominated government against Tamil rebels who want a separate state.

Older people are addressed extremely respectfully using Mr/Mrs.  People are often addressed according to their position e.g. Mr. Head of the Department, Mrs. Field Director, etc. Once you are familiar with people, you can use first names.

When meeting with new colleagues for the first time, briefly outline your accomplishments and highlights areas that are most relevant to your project.  It’s worth demonstrating your previous experience and credentials (without boasting). Transparency, friendliness and an ability to “go with the flow” are important elements of team-working here.

Sri Lankans are polite and agreeable by their nature and say yes, which should be taken more to mean they understand what you are saying. If you are asking them to do something, they may say yes, but may not follow through. Following up is always a good idea to ensure that information is understood and appropriate actions are being taken.  Ask open-ended questions to check for clarification.

Authority and decision-making in the work place is often based on a pre-established hierarchical structure, supported by communication patterns and lines of authority.  Some expats will find the bureaucratic environment slows decision-making, so investing time in good relationships with supervisors will help make decisions faster.

Avoid raising your voice or showing strong displays of negative emotion. Sri Lankans generally view this as a loss of control. It is best to confront a team member privately and try to solve things in a friendly manner. However, your colleague will usually respect their boss more and it may be more common to request the boss to intervene in the problem.

Finally, body contact between genders is kept minimal throughout most of Sri Lanka. Sri Lankans also consider the head to be the most sacred part of one’s body. Therefore, it is considered rude and inconsiderate to touch another person’s head, especially children. People often tilt or ‘waggle’ their head to the side or both sides to indicate agreement and understanding.

What is the name of the land connection between Sri Lanka and the Indian mainland (now mostly submerged with only limestone shoals remaining above sea level)?

Inspired? If you want to learn how you can work more effectively with your Sri Lankan colleagues, clients or supplier, contact us for a 'Working Effectively with...' sample course outline'.

All training is tailored to suit your needs and currently delivered live online.