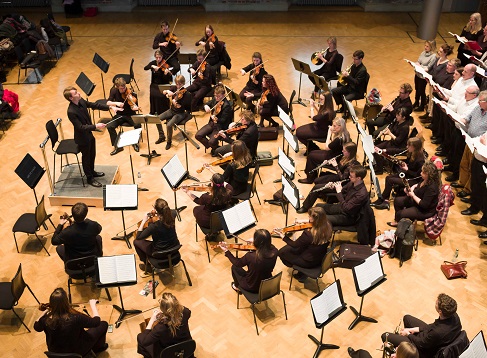 Cambridge Summer Music marks the return of live music in 2021 with an exciting programme focusing on French and British music and spanning from the Baroque to a world premiere by one of Britain’s outstanding and up-coming composers.

A highlighted composer is Frederick Delius, and performances of his works owe much to a generous grant from the Delius Trust.

Originally a series of organ recitals, CSM has developed into a packed fortnight of extraordinary music with something for everyone. Festival Director Freya Goldmark: “After a year without live performance, I am thrilled to announce this year’s Cambridge Summer Music Festival featuring more than 30 concerts and over 100 musicians. These challenging times have highlighted how crucial live music is to us all and it has been inspiring to be working with musicians once again to plan this festival.”

The festival kicks off Saturday 17 July at West Road, with the Faust Chamber Orchestra (pictured) under the baton of Mark Austin playing Saint-Saëns’ whimsical Carnival of the Animals, narrated by violinist Tasmin Little, and Dvorak’s Serenade for Strings. The world premiere of a new work by rising star and young British composer, Charlotte Harding, is sure to be a highlight.

For younger audience members, there will a special performance of Carnival of the Animals earlier that very same day, 17 July, presented in a way accessible to young children. Chairman Henry Edmundson: “In fact, the entire festival is designed to attract the younger generation. We are delighted to announce a partnership with the Cavatina Chamber Music Trust, which sponsors tickets for the majority of our chamber concerts for all young concertgoers aged 8 to 25. The generosity of the Cavatina Trust will provide a huge boost in attracting the younger generation to such a fine range of concerts in our 2021 festival. For concerts not covered by the generosity of the Cavatina Trust, the festival guarantees free tickets for all aged 16 and under.”

Robert Max, formidable cellist and well known to Cambridge audiences for his work with the Barbican Trio, takes the stage to play all six of Bach’s Cello Suites Sunday 18 July). Max performs on a 1726 Stradivarius cello known as the Comte de Saveuse; for the sixth and final Suite, he plays a special five-stringed cello, as requested by the composer.

Legendary English composer Gavin Bryars gives two back-to-back performances including his most celebrated work, Jesus’ Blood Never Failed Me Yet, plus his acclaimed Sinking of the Titanic, a classic of British experimental music recreating the ghostly sounds of the doomed ship’s band as they slipped beneath the waves (Tuesday 20 July).

Festival Director Freya Goldmark returns for a performance of Mozart’s String Quartet No 19 in G major and Chausson’s Concerto for Violin, Piano and String Quartet, alongside the Quatuor Confluence quartet, with Bengt Forsberg on piano (Thursday 22 July). That same evening, Goldmark teams up with Forsberg, cellist Ben Tarlton and clarinetist Joseph Shiner for a performance of Messiaen’s Quartet for the End of Time. First heard in a German prisoner-of-war camp in 1941, this extraordinary piece has lost none of its power in the intervening eight decades.

Lovers of period instruments and historically-informed performance will be thrilled by the world-famous Chiaroscuro Quartet, playing pieces by Haydn and Mendelssohn on gut strings with historically-correct bows (Friday 23 July). Another type of historically informed performance comes to West Road with the all-male De Profundis choir, under the direction of Robert Hollingworth, performing a mix of vocal music marking the quincentenary of Renaissance composer Josquin Desprez (Sunday 25 July). This concert summons the musical glories of a bygone age and includes pieces by Palestrina, Nicolas Champion, Gombert and Pierre de la Rue, as well as Josquin himself.

The eclectic and acclaimed pianist Joanna MacGregor will treat audiences to an extraordinary kaleidoscope of compositions across several centuries in two connected recitals Call of the Birds” and “Grounds and Chaconnes” (Saturday 24 July). Nothing prepares the listener for the originality, excitement and virtuosity of Joanna MacGregor. This will be an evening to remember.

The Junior Prime Brass draws talented musicians aged 13 to 18 from around East Anglia, playing an afternoon programme of crowd-pleasing works by Handel, Grieg, Rachmaninov, and Quincey Jones (Sunday 25 July). They were a sold-out success in 2019, and with two years off to hone their craft are sure to be an even bigger hit this year.

Cellist Alexander Baillie and pianist Nigel Yandell team up for a concert of unexpected contrasts at the Downing Place United Reform Church, with Debussy’s Cello Sonata alongside works by Delius, Janáček and Martinu (Tuesday 27 July).

The following day, David Hill and David Ponsford take the audience on high-velocity double-harpsichord maneuvers through colourful pieces by Vivaldi and Couperin, closing with Bach’s beloved Brandenburg Concerto No. 6, at St John the Evangelist Church in Hills Road (Wednesday 28 July).

Fusing the authentic rhythms and melodies of Latin America with classical techniques and instrumentation, Classico Latino bring a mix of samba, bolero and tango, along with other more exotic musical styles, in a colourful and percussive concert (Thursday 29 July).

The Festival comes to an inspired conclusion with David Hill MBE, Festival Artistic Adviser and a firm favourite with Cambridge audiences, leading the Faust Chamber Orchestra in a concert featuring two unforgettable pieces inspired by the City of Light – Delius’ Paris: Song of a Great City and Gershwin’s An American in Paris, plus works by Debussy and Dukas.

Cambridge Summer Music Festival is proud to announce a new initiative for 2021, free tickets to 25s and under for many of the concerts, otherwise free tickets for 16s and under. Please check out the website cambridgesummermusic.com for further information.

More information and how to book

Tickets are now on sale and priced £5-22, available online from cambridgesummermusic.com. Unfortunately, due to ongoing restrictions, advance booking by phone will not be available, nor will tickets be available at the door.