A Cambridge Tripos in blue 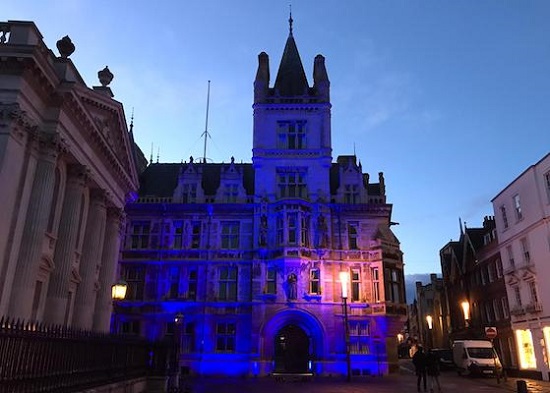 Tonight Cambridge’s team of event professionals lit up a trifecta of venues and monuments for the fifth week in the city’s Make It Blue campaign.

First up was Gonville and Caius which houses the largest intake of medicine students among the Cambridge Colleges. The Master, Dr Pippa Rogerson, said ...

“We are incredibly thankful to all key workers and especially proud of those Caians who are on the frontline. It is wonderful to see Great Gate, such a visible landmark in Cambridge, lit up in blue in support of the valuable work of NHS staff, key workers and carers in all settings.”

It was also a personal goal for project leader Justin Crane to light this stunning building to thank our heroes as his uncle was an alumnus, studying there back in the 1960s.

Justin commented “It really meant a lot to be asked to light up the Great Gate. Knowing that my late uncle, who I deeply admired, studied there and went on to change lives throughout the world just solidified the want to celebrate their medicinal legacy in any way we can.”

The evening’s second venue, Westminster College, is an equally beautiful building to champion the more well known of Cambridge’s landmarks.

"All the team from Westminster College are excited to be involved in the #makeitblue campaign and proud to be able to thank our NHS teams across the country in this way. The College looks fantastic and provides an amazing canvas to show our appreciation of the work being completed by the NHS teams," said Nick Lomax, Business Development Manager at the College.

Keeping things on a personal level, the event team were approached by the daughter of a former University Design Engineer with a dream for tonight’s third illumination.

Sharon King-Livesey commented, “Cambridge's iconic sculpture ‘Construction in Aluminium’ was illuminated in blue in support of the NHS and key workers tonight. Built by my Dad, Design Engineer Clive King in 1967, and a team at Cambridge University Engineering labs, Kenneth Martin’s sculpture design is synonymous with the innovation happening in Cambridge and beyond, in the fight to save lives.”

This trio of illumination was possible thanks to a local team of kind-hearted event professionals who dedicate their time and expertise each week to making this happen. The group includes The Crane Event (project management), JMPS (projection) and Pink Lamp and Blueshed (lighting) and JezO’s (event support).