Urban&Civic, the master developer behind Alconbury Weald, has teamed up with archaeologist and Channel 5 broadcaster Raksha Dave to create the second episode of the Alconbury Weald Stories podcast, focusing on the area’s fascinating heritage, from the Bronze Age to the Cold War. 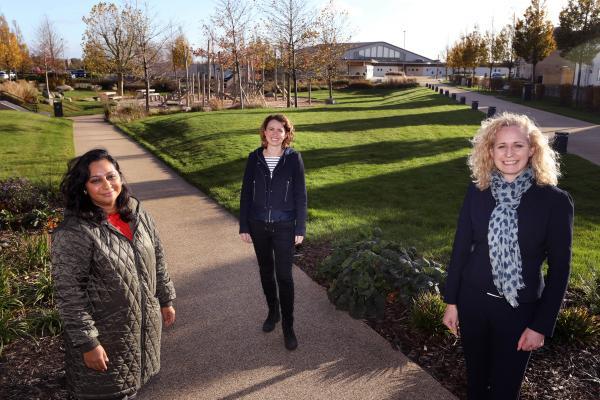 The new episode, hosted by Raksha, features insights from residents Malcolm, a former member of the Royal Air Force crew, and Anne Rigby, his wife, who recently moved to Alconbury Weald from St Ives. Malcolm, who is now retired, talks about being temporarily stationed at RAF Alconbury back in 1985 and shares his impressions of the site which has come a very long way since the 1980s. Today, it’s an established community, however some of the elements of the Cold War era have remained – for example, the listed Watch Office, which has been meticulously restored by Urban&Civic to serve the local community.

Joanne John from Bradley Murphy Design, the consultancy that developed the landscaping strategy for the site, talks about how the military heritage of the former RAF base had informed the landscape design of the scheme and what has been done to reflect its Cold War heritage, while making the place ideally suited to the needs of modern buyers.

Clemency Cooper from Oxford Archaeology East joins the podcast to draw the listeners’ attention to Alconbury Weald’s deep historic roots. Through a series of archaeological studies and excavation works, her team has managed to uncover evidence of people living at Alconbury Weald during the Bronze age, attracted by the area’s varied landscape. The team’s studies have helped reveal the role Alconbury Weald played during the Iron Age, the early Roman period and the medieval times, when the whole of Huntingdonshire was declared a Royal Forest, a testament to its biodiversity and desirability.

Thanks to its advantageous geographical positioning and strong connections, Alconbury Weald has been attracting settlers and merchants for centuries. It is now on its way to becoming Cambridgeshire’s major enterprise hub, sitting halfway between the global city of Cambridge and the fastest growing city of Peterborough, whilst being a key part of the Oxford/Cambridge arc. The development has been shaped by the historic strengths to create a perfect place for family living, with abundant green spaces and brand-new facilities, designed in keeping with the site’s history and to meet future residents’ needs.

Malcolm Rigby, resident at Alconbury Weald, said: “I knew Alconbury as an American airbase and landed my plane on the runway here many times in the six months of being based here, but I never thought Alconbury would become my home. It has flourished beyond belief, transforming into a real community, and we’re excited for what’s to come.”

Joanne John, Associate Landscape Architect at Bradley Murphy Design (BMD), said: “We’ve really enjoyed working on this project, which offered a unique opportunity to incorporate existing heritage features into a new development. As landscape designers, we look to the landscape and existing built form within the site and wider context to provide us with cues to the past to understand the history of the site, how it was used before and how it can help shape the future design. At Alconbury Weald, the heritage plays an important role in defining the place and has influenced the design layout of the new parks and public open spaces. The existing heritage features provide a tangible link with the past and help to contribute to the future sense of identity and character of Alconbury Weald.”

Rebecca Britton, head of partnerships and communities at Urban&Civic, said: “The heritage of Alconbury Weald has fundamentally shaped the vision for our green spaces, the layout and design of the new buildings coming forward, and how we protect, enhance and interpret important pieces of history – from the scheduled ancient monument in Prestley Wood, the listed Watch Office and parks created on old taxiways, to the hangars and bunker, which will form a future Cold War Heritage Area in later phases of the development. The echoes of history provide depth and soul to the new community, and we hope the podcast will be part of connecting our new community to the footsteps which went before them, helping set down roots in this very special place.”

Raksha Dave, archaeologist and broadcaster, who hosted the second episode of the podcast, said: “I love the fact that at Alconbury Weald you can see the physical remnants of historic moments: from ancient woodlands to a Medieval moated Manor House, runways used during the Second World War and Cold War structures peppering the landscape. This rich history is embedded in the community, and it’s this sense of time that gives people a deep connection to Alconbury Weald’s past.”

The episode is now live and available for download here

Urban&Civic are the owners and developers of Alconbury Enterprise Campus: the Government-backed Enterprise Zone established in 2011 to create nearly 3 million sq ft of high quality low carbon business space for production, R&D and offices to the North of Cambridge. ...